The two final Hall H panels of Saturday were the best of Comic-Con as far as I’m concerned. In another post, we’ll talk about the Marvel panel, but first Warner Bros. and Legendary showcased an epic line up of films that included Pacific Rim, Godzilla, Man of Steel, and The Hobbit: An Unexpected Journey. Check out my recap, including footage reaction, after the break.

Warner Bros., a sponsor of San Diego Comic-Con 2012, really pulled out all the stops with their presentation. Hall H has one big screen up front with the panelists and three more more mid-way through the crowd for the people in the back to see. However, they unveiled for the first time two wrap-around screens on either side of the main screen, and they used it as a backdrop for all their panels. It was really impressive.

The first panel of the set was for the giant monsters vs. giant robots epic Pacific Rim. The panel consisted of Director Guillermo del Toro and stars Charlie Hunnam, Rinko Kikuchi, Charlie Day, and Ron Perlman. Del Toro stressed that his is not a war movie, it’s more of an adventure movie. He wants there to be huge emotional content and to give the audience a sense of awe. Filming was completed 12 weeks ago, and del Toro got a lot of freedom from the studio to do it how he wanted. He said that when you’re given a big budget, you can go crazy or lazy, and he wanted to go as crazy as possible. He also tried to create a world where both of these impossible things could actually exist.

During the fan Q&A, del Toro confirmed to robot fans that there will be rocket punches, but no drills. There will about nine kaijus (monsters) that are all original and six or seven robots. They originally came up with ninety different kaiju designs and had to vote to narrow them down. They designed the monsters from the inside out to make them more real, and they wanted to try to do new things with monsters. The robots are controlled by two people, each controlling one side of the robot (like the halves of a brain). We will see what happens if only one controls a full robot.

Speaking of new, del Toro said that some of their set designs have never been seen on film before. Del Toro treated the CGI like animation, was strongly against using motion capture (too human-like), and tried to give the monsters personality. While there is plenty of computer animated graphics, there are also some big real set pieces, including a shaking city street at one point. To make the CGI seem more real, he used camera lens tricks like scratching it up and having splashes of water on it.

The trailer/sizzle reel we saw definitely had an epicness to it. The robots and monsters are enormous, the size of skyscrapers, and it’s amazing to see them move and fight, even with only early graphics. We see a bit of how the robots function (pilots use their whole body and have to synchronize their actions), but not much storyline. Either way, Hall H was definitely impressed.

We started off seeing the teaser, which shows a destroyed city landscape with a voiceover of the famous “Now I am Become Death, the Destroyer of Worlds” quote by J. Robert Oppenheimer. We see a large beast on laying on the ground, then thumps as something comes through the dust of debris, revealing itself to be Godzilla. It gives off a thunderous roar, the title card comes up, and the Hall H audience goes wild. It have a very ominous tone, and I think the film could be quite scary. The design of Godzilla looks to be pretty classic, and much better than the last one.

Director Gareth Edwards talked about the film, saying they are going to take it seriously. It’s not going to be sci-fi, it’s going to be grounded and realistic.

Will Ferrell and Zach Galifianakis made a surprise appearance to show what looked like a new trailer, and take awkward fan questions. It was pretty funny yet silly break to the action-packed line up, and you can read a more detailed rundown here.

Zach Snyder and leading man Henry Cavill came out to talk about Man of Steel, a reboot to the Superman franchise. They felt like they needed to reintroduce the character, and the question was “how do you make Superman personal?” What would you do if you were him? Snyder confirmed that they are done shooting, and it looks “awesome” so far. They were originally only going to show us the announcement teaser that will be attached to The Dark Knight Rises this coming Friday, but instead, we got what is basically a full teaser trailer.

As a huge Superman fan, I am confortable saying that the teaser almost made me tear up (one fan was full on crying when trying to ask his question). I got goosebumps seeing Superman as he was meant to be. There’s not a lot of plot fleshed out in the trailer, but we do see a lot of bearded Clark Kent, including one scene where he is coming out of a room full of fire, and he’s shirtless with flames coming off him, yet he doesn’t even blink an eye at it. We see a young Clark save a school bus, with implications that his abilities are what forced him to go to the outskirts of civilization. We see Pa Kent (Kevin Costner) reveal to Clark as a kid that he’s not from this Earth, and we see his birth father Jor-El (Russell Crowe, who also does some narration) reveal his S symbol to Clark in what should be the fortress of solitude (it looks like the interior of a spaceship). We then see Clark in the full Superman outfit come out and take off flying straight up. There’s a bunch of other quick shots, including a little more of Superman flying, a very brief look at Michael Shannon as the villain Zod, Superman with Lois on a military base, and Superman being taken down a hallway by military police in handcuffs. One of the best quick shots is Superman being thrown into a bank and hitting a big safe, denting it in the process. It seems that this is where the first promotional photo came from. I don’t remember the sequence of these clips, but it came together very nicely, and the crowd (including myself) loved it.

Snyder explained that the goal is to make Superman work and be cool, while bringing out the humanity in heroes. Via the Q&A, we found out that Christopher Nolan (who is executive producer on the project) called Snyder about the movie and pitched him the story. Snyder has great respect for canon and mythology, but as Cavill mentions, the goal is to modernize the character. Cavill really wants to the please the fans with the movie, saying it was made for them. When asked who would win in a fight between Batman and Superman, Snyder said “C’mon, really?”, which I thought was the perfect answer. Snyder revealed that Hans Zimmer’s score will not include John William’s classic Superman Theme at all, as they are trying to act as if the other movies didn’t happen. Cavill got a lot of inspiration for his Superman from the comics “The Death and Return of Superman” and “Red Son”. When asked about a potential Justice League movie and build up ala Marvel’s The Avengers, Snyder said that they are focused on getting Superman’s house in order, then who knows what is possible.

Click here to watch a video of the panel (without teaser), and check out the revealed teaser poster below. 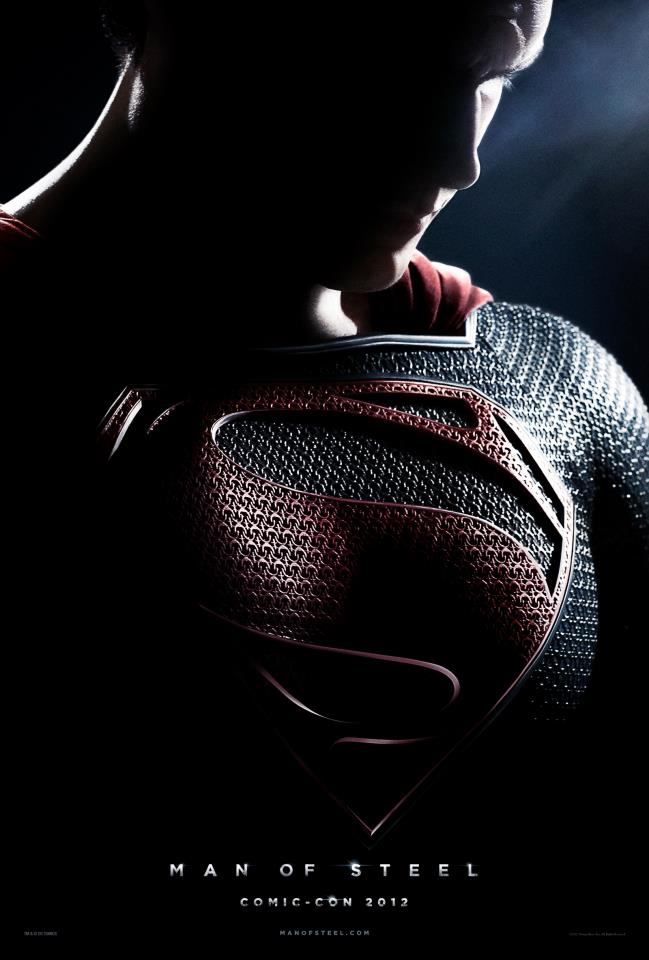 The final panel for Warner Bros. was The Hobbit: An Unexpected Journey, the prequel to The Lord of the Rings series. The panelists were director Peter Jackson, co-writer Philippa Boyens, and stars Andy Serkis (Gollum), Martin Freeman (Bilbo Baggins), Ian McKellan (Gandalf), Richard Armitage (Thorin), and a surprise appearance by Elijah Wood (Frodo).

We started off by seeing on of Peter Jackson’s famous production video blogs, this one exclusively for Comic-Con and covering the final days of filming. We then see over 12 minutes of the film, including a few scenes and then an action montage. This is by far the most footage we’ve seen for any movie here at Comic-Con this year. It all looked great, and feels like a Lord of the Rings film. There’s a lot of emotion and humor, which most of the sizzle reels lack.

We quickly jumped into the Q&A, where one fan asks if any female characters added to the movie, since the book only really has one. Boyens confirms that they added female Elf (LOST‘s Evageline Lilly) to balance it a bit. When asked how hard is it to work with prosthetics, Freeman said that the hobbit feet are weird at first, but he quickly got used to them. Armitage explained that they had to work harder to show facial expressions, which is tiring.

A fan asked if there was a chance that Jackson could adapt Tolkien’s “The Silmarillion”, but the Tolkien estate holds the rights to the movie, and they apparently don’t like The Lord of the Rings movies. Martin didn’t feel the pressure of joining the juggernaut. Jackson said that his choice for what goes into the extended cut vs. the theatrical cut is very organic and made near the end of the process. Serkis was supposed to come back for only a few weeks of filming Gollum, but ended up becoming the second unit director. Part of the “Riddles in the Dark” sequence was shown in the sizzle reel, and it was all done in one shot. It took two weeks to shoot it, and Freeman likened it to a theater piece.

That’s it from the Warner Bros./Legendary panel. Stay tuned for our recap of the Marvel Studios panel!