‘The Dark Knight Rises’ Review: Does The Final Entry Buckle Under Its High Expectations?

In 2005, Director Christopher Nolan took his stab at the all-holy Batman mythos and came out on top, delivering “Batman Begins”, the most heartfelt, real portrayal of the character to date. Three years later, he literally revolutionized the game by releasing the critically acclaimed “The Dark Knight”, which put the caped crusader toe-to-toe with the cold-blooded, anarchist The Joker. And now, seven years after our first glimpse of the new Bruce Wayne, we’re treated with the trilogy’s second sequel, “The Dark Knight Rises”. Does it hold up? Can it beat the high praise of the previous entry? Hit the jump because the fire is about to rise.

Allow me to say that if you thought your anticipation was high for this new film, then you truly have no idea what I endured yesterday afternoon.

The advanced screening I was treated to began at 9:30 PM, but you better believe that I was standing in line, water bottles in hand, at 3:30 PM. As the time ticked on ever so slowly, I felt the arm hair raising and the bones tingling. As a deep Christopher Nolan fan, I had waited years for this final entry, and when the lights went down at the Navy Pier IMAX in Chicago, and the icy Bat logo came cracking at the screen, I knew right then and there that the pot of gold at the end of the rainbow was finally at arms reach.

But how did the film hold up? Did it buckle under it’s own anticipation? 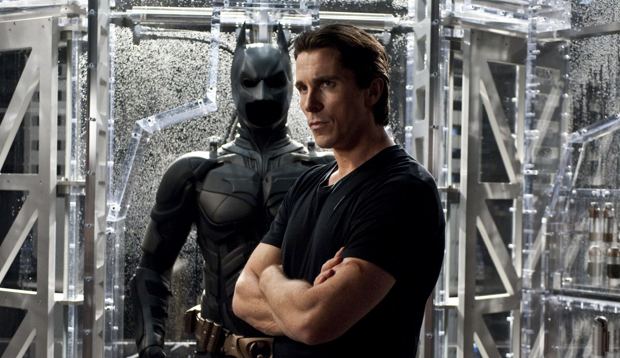 Hell to the no. From the epic opening prologue (seen before ‘Mission Impossible: Ghost Protocol’), to the knuckle crunching blows shared between Batman and Bane in their many man vs. beast throwdowns, it’s safe to say that “The Dark Knight Rises” held up it’s end of the bargain and delivered with force. That’s not to say though that the film didn’t have it’s little inconsistencies. The running time of 146 minutes had no fighting chance of coming out clean without one or two imperfections. Nolan and crew obviously understand that if this is their final Batman entry, then they have to focus up and tie together any loose ends that the fans are sure to point out, but I won’t get into those, because they’re indeed spoiler territory.

The first third of the film was a little bit of a brain-sore, just because the viewer has to process all these new characters so fast. Hell, it’s been eight years since the events of “The Dark Knight”, so we have no choice but to catch up on every Joe Somebody and figure out how they play into the new Gotham City. Once these characters are rolled out and have their room to breath, things really start to pick up.

Deception, anarchy, characters hitting their absolute low; it’s all here and it’s all on display in the utmost of gritty. The darkness in this new film is real; it’s painful. Human beings stripped of everything that make them human in the first place. If you thought the previous two films were realistic in their pain, then you will be taken to a new place with “The Dark Knight Rises”. That’s all I can really say without gushing fanboy geekness all over this review, spoilers stretched from end to end. (We’ll talk spoilers after opening weekend.)

Of all those new characters introduced, I have to direct my praise towards Joseph Gordon-Levitt and Tom Hardy. Two men on both ends of the law, fighting for what they feel is right and just. To put it lightly, Hardy owned the artificially respirated juggernaut Bane, while Gordon-Levitt stood out immensely as John Blake, a police officer that will no longer step aside and watch his city burn. The two are polar opposites of their characters from “Inception”, but you can tell that they each brought with them their newly-forged relationship with Christopher Nolan.

Another spectacular addition to the lead cast is Anne Hathaway as Selina Kyle aka ‘hush – don’t refer to her as Catwoman’. If you thought you had Hathaway figured out, then forget it. She’s stylish, she’s sexy, and gives all the boys in blue a run for their money. She’s easily the most surprising addition to the already finely-tuned cast of characters, and really gives Marion Cotillard as Miranda Tate a challenge for Bruce Wayne‘s attention. 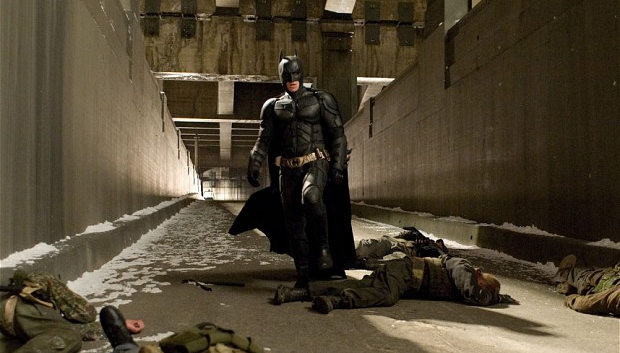 Lest we not forget about the man, the myth, the legend himself, Christian Bale as our hero, Bruce Wayne and his counterpart Batman, both two truly different characters in this spectacle. Bale brings desperation to his role. He brings pain that you can feel in every scene he has the pleasure of being in. Batman is tested with his toughest challenge yet, and you can feel it. But the real question is: What happens to our hero? Buy your tickets now, because you’ll want to see this.

The other notable performances in the film go to the always talented Michael Caine and pal Gary Oldman, who surprisingly both take more of a backseat to the fun than they ever had before, but don’t worry, the story does benefit from it.

The action is stellar, the direction is perfection, and the emotion really shines through. I recommend your first showing be in IMAX. You won’t regret it, and you can trust me on that.

To sum the film up in one sentence: aside from a few clunky, slow-burning scenes, and some inconsistencies, I would consider this film nothing less than a success in the trilogy. Christopher Nolan has delivered on par for his bookend final film, and for that, I tip my hat.

Congratulations cast and crew, you did it again.

Note: Please watch the first two Batman films before heading to “The Dark Knight Rises”. This entry rely’s on the ‘full circle trilogy’ device pretty heavily. You don’t want to get lost in the mix, people.