“The Dark Knight Rises” Review: A Legendary Ending to One of the Greatest Stories Ever Told

In 2008, many people thought that Christopher Nolan had made the ultimate Batman movie. They thought that if he were to come back and do another, it wouldn’t be able to top The Dark Knight. What I’ve come to realize about this trilogy is, you can’t look at each film individually and say one is better than the other. You really have to see them as a whole. The Dark Knight Rises is the final piece to the puzzle, bringing elements from Batman Begins and The Dark Knight to show the audience the consequences of the choices made in each film.

For Bruce Wayne, the last 8 years have been very hard. He’s hung up the cape and cowl, as Batman is Gotham’s most wanted criminal after taking the fall for the crimes Harvey Dent committed. Bruce has also run his company into the ground with a mothballed energy project. Worst of all, he’s become a recluse with long, yellowed fingernails (kidding), a scruffy goatee and rumor has it he’s been urinating in old mason jars. But the arrival of Selina Kyle (played brilliantly by Anne Hathaway) has Bruce itching to put his mask back on. By now, we’re used to hearing his growly Batman voice, but at certain times it’s too much and becomes unintentionally hilarious. 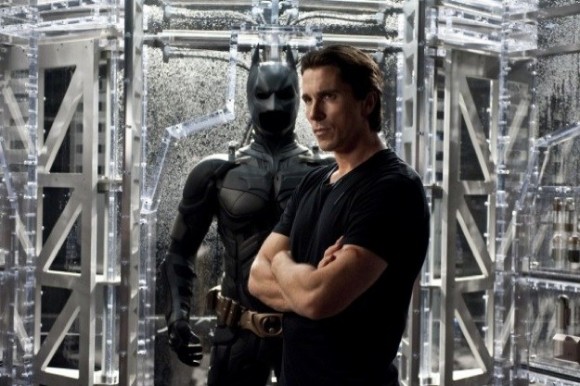 Alfred (Michael Caine) and Lucius Fox (Morgan Freeman) return to provide Bruce with moral and tech support, respectively. Michael Caine’s performance this time around as Bruce’s caretaker is much more emotional as Alfred has to deal with the consequences of Rachel’s death and watching the effect it has had on Bruce. Morgan Freeman’s Lucius Fox is also dealing with consequences of business choices Bruce has made, mainly, the energy project.

And let’s not forget Gary Oldman as good ol’ Commissioner Gordon. Gordon has to be the most conflicted of everyone in this film, carrying the burden of knowing what he and Batman did 8 years ago to protect the city was wrong. With a new law passed in honor of Harvey Dent that has kept the city clean of organized crime, Gordon wants to come clean but doesn’t want to risk everything coming undone. How can he keep the city safe when everything that has been done to protect it is based on a lie?

Anne Hathaway’s Selina Kyle is definitely my favorite incarnation of the character. While she’s never referred to as Catwoman, this version is much less campy than Michelle Pheifer and Halle Berry, but definitely as just as sexy. Selina’s actions get her in trouble with the wrong people for a “clean slate,” but surely such a thing doesn’t exist for a person with a rap sheet as long as Ms. Kyle’s, right? Even though their relationship starts off a bit rocky, she makes the perfect sidekick for Batman because she too is “broken.” Them working together was one of my favorite aspects of this film.

The brute strength of Bane isn’t the only thing that makes him terrifying. The respirator that helps him cope with a grisly injury covers most of his face, so Tom Hardy had to rely on body language and limited facial expression to bring Bane to life. And it works. When you look at Bane, his eyes are piercing and full of anger. You can almost feel him squeezing the life out of you without him even putting a hand around your neck. The IMAX format makes his commanding presence even more dreadful and it would seem that Batman has met his match both physically and mentally.

We also get a very strong performance from Inception-alum Joseph Gordon-Levitt as GCPD Officer John Blake. When Blake sees that it’s going to take more than Gotham’s police to bring down the “masked man,” he doesn’t lose his faith in The Batman, hoping his chalk drawings will convince whoever the Caped Crusader is, that the city still needs him. Another newcomer to the franchise, but no stranger to Nolan films, is Marion Cotillard as Wayne Enterprises board member Miranda Tate. Miranda, an environmentally conscious woman, firmly believes in Wayne’s defunct energy project, that it can provide the city with clean, renewable energy for years. However, she can’t seem to grasp why Bruce would want the project shut down. 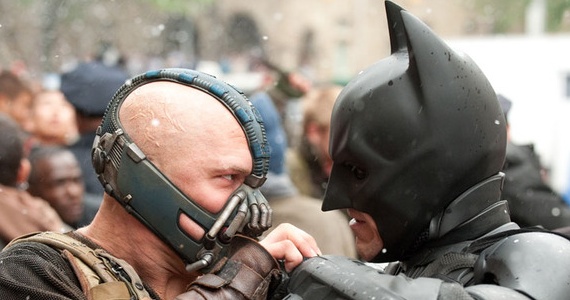 Using today’s hot topics (i.e. the international economic issues, tyrants being overthrown, clean energy, etc.), Christopher Nolan has crafted the perfect ending to his Batman legend, but every film has its flaws. What’s going to be interesting to see is how the end of this particular film will divide Batman fans and Nolan fans. However, I’m not going to say anymore about that. What’s also going to have fans talking is the amount of humor, much more than the last two films, but not too much that it becomes a Joel Schumacher ordeal. The light-hearted moments are actually welcoming with having to deal with such dark and often, distressing moments throughout this film.

I really enjoyed this movie, it was an emotional roller coaster ride! The last 15 minutes will have people crying, shaking with adrenaline rushes and maybe even scratching their heads. Don’t be one of those people scratching their heads, go back and watch the first two before you see this one. As I said earlier, you can’t look at each film individually, it is one flowing story. When Nolan said he wanted to bring Bruce Wayne’s story full-circle, he meant it. I love the fact that Nolan and Wally Pfister were able to overcome the obstacles of shooting with the IMAX cameras. Combined with Hans Zimmer’s amazing score, their work really pays off and I wouldn’t be surprised if Mr. Pfister gets several award nods this season for his cinematography work.