We all do it. We put on our headphones, play a favorite track and walk down the street pretending that it’s the soundtrack to our lives. Sometimes, if we’re lucky, the beat even syncs with our footsteps. Featuring over 2-hours of new and original music, The Dark Knight Rises Z+ Augmented Soundtrack Experience, turns your world into Gotham City! More details after the jump.

The Dark Knight Rises Z+ Augmented Soundtrack Experience takes you inside Hans Zimmer’s score of The Dark Knight Rises. The app includes three-augmented music pieces based on the themes of the film. The app features two modes: Manual (where the user chooses what they hear) and Autopilot. In Autopilot mode, the app creates a custom sonic world based on the user’s location, movements, time of day, and other factors to generate the ultimate real life soundtrack. You can also hear commentary from Hans Zimmer and director Christopher Nolan about the score with the “Story Time” Feature. 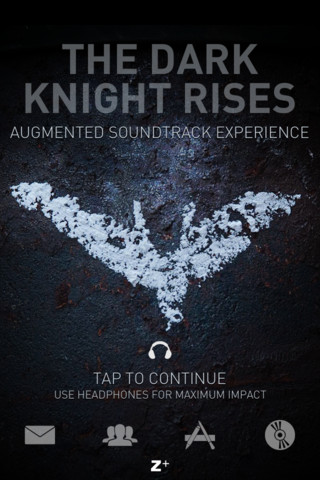 “I’m hoping to give fans of this beloved trilogy the opportunity to fully immerse themselves in the sounds capes and atmospheres of the world of the Dark Knight,” said Zimmer. “This new app allows users to be part of the film in a way that goes beyond the movie screen-it’s the difference between a looking at a photo of a river, and being able to drop your hand over the side of the boat and feel the currents of the water tug as the river takes you on a journey.”

However, just because the app is free, doesn’t mean all of its features are. If you want to experience all that this app has to offer, you’ll have to be prepared to shell out some cash for several of Hans’ original compositions for the film which served as the back bone for what we hear on the the soundtrack. Also for purchase are two “scenes”: ‘Gotham City by Night’ and ‘Nightfall’. Both will play while in Autopilot when you’re out at night and during the sunset, respectively. 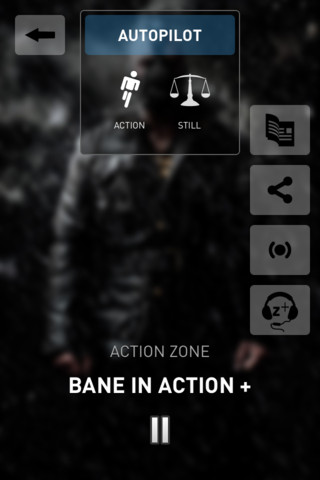 There is also a special “Fly the Bat” mode available for $0.99, where users can fly Batman’s newest toy and interact with sound effects from the film created by Academy Award® winning sound designer Richard King, by rotating and tilting their device.

With The Dark Knight Rises Z+ Augmented Soundtrack Experience, you won’t have to pretend the music you’re listening to is the soundtrack of your life. It is available exclusively in the App Store on the iPhone and iPod Touch.

Be sure to check out The Dark Knight Rises, in theaters and IMAX now!