Its not to often studios offer fans the chance to be part of a mega blockbuster actioner like The Expendables 2, but Lionsgate is giving their fans a chance. Okay, not really, the film completed production a couple of months back, but the studio is still giving you a chance to be a part of the film in another innovative way. Check it out after the jump.

If you think you have what it takes to be an action star like Sylvester Stallone, Stallone, Arnold Schwarzenegger, Bruce Willis, Van Damme or Chuck Norris, then you would have to prove it by downloading the free iPhone/iPad app at www.TheExpendablesInfiniteTrailer.com or www.JoinTheExpendables.com.

After you download, you will be offered to be a part of 6 exclusive Expendables action movie effects, which you can share with your friends after you completed the movie making process.

The app resembles the action movie app that Bad Robot produced a while back. It allows the user to choose from six different kinds of weapons that would inflict all kinds damage. From air strikes to grenades to RPGs, if you feel like you are in a destructive mood, then feel free to use these explosive weapons.

Here’s an example of what kind of action you can expect when using the app. 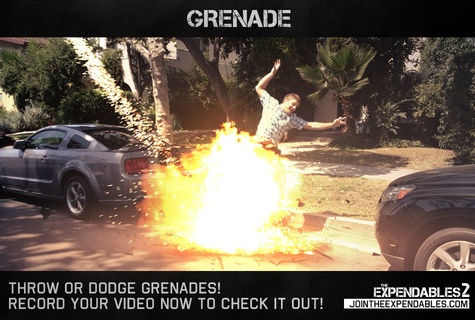 The Expendables 2 opens in theaters on August 17th.