Do You Live Near a ‘Murder House’? This “American Horror Story” App Will Let You Know

You know how when you buy a house, the real estate agent is supposed to tell you the home’s history? What if the house you were looking at purchasing had a very gruesome, blood-stained past? You probably wouldn’t buy it and move on to the next listing. Well believe it or not, there are homes in your very neighborhood where not so nice things happened. If you’re curious about which of your neighbors’ homes a family was murdered in, check out the American Horror Story: Murder Houses In Your Area app. More info after the jump.

When you launch the app website, you’re asked to plug in your address to search for “murder houses” in your neighborhood. Don’t be surprised when your house is listed as one. You’re given a description of the home and exactly what happened that caused it to be listed as a murder house. The default description is that the home was built in 1922 and would soon claim the lives of those that inhabited it. I knew this wasn’t true for my home since we had it built in 2003 and my family and I are still alive and well.

You can then explore the actual murder houses around your area. The app uses Google Street View to give you a look at the homes, but it isn’t very accurate. If an image isn’t available, you get to stare at a blank, white space. If you’re lucky, you won’t actually find any in your neighborhood, but maybe some in the state where you reside. The app will also give you a body count as well as a murder rating. Not exactly sure how it rates the murders though. Check out this murder house located about an hour from me. 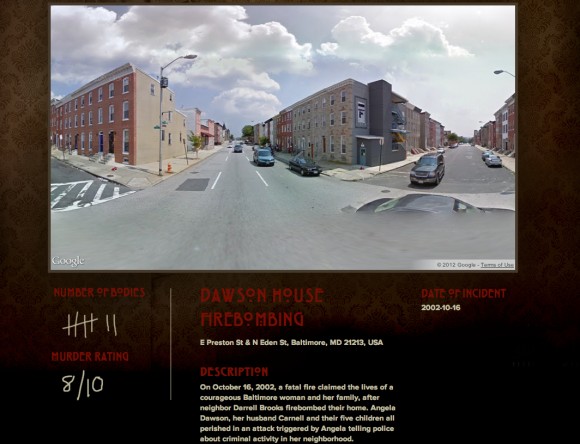