IMDB Lists Extra As Star of “Jack Reacher” Thanks To Reddit

Alexander Rhodes was an extra in the action film Jack Reacher, starring Tom Cruise as the title character. This alone would not be an interesting story, especially since Rhodes is just another struggling actor like thousands of others in Hollywood. However, Rhodes figured out how to get his name above Mr. Cruise on the film’s IMDB page. Find out how after the break.

Rhodes goes by the username Alexanderr on Reddit, where he posted a link to his IMDB page as a comment. The link got a lot of traffic, and Rhodes noticed that he had jumped up to the fifth person listed in the cast of Jack Reacher, despite only being credited as “Suspicious Onlooker”. 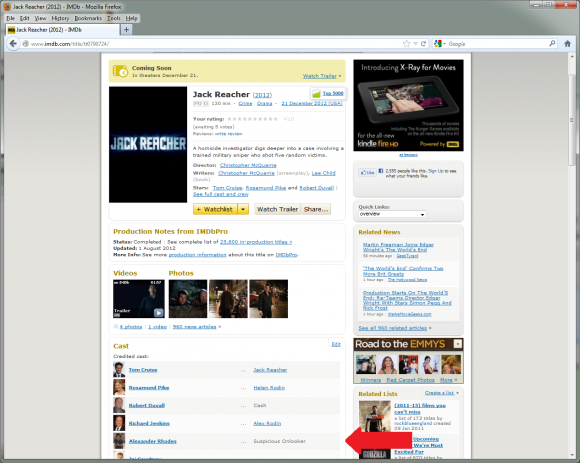 Rhodes realized that IMDB ranks cast members based on profile traffic, so he went back to Reddit to post about the phenomenon. That thread now has over 2100 comments, and Rhodes is now on top of the cast list, above even Tom Cruise. Cruise (or at least his camp) got wind of the situation and tweeted his support. Rhodes is also at number 8 on IMDB’s STARmeter.

Rhodes hosted an AMA yesterday to answer questions about his experience. I was surprised to learn that IMDB is fully aware of the situation and is rooting him on. Hopefully Rhodes can use this 15 minutes of Internet fame to further his career as an actor. You can help him keep his rankings by going to his IMDB profile. I know I’ll definitely be looking for Rhodes when Jack Reacher hits theaters on December 21st.