Last week, we got our first look at Star Trek Into Darkness, J.J. Abrams’ follow up to his 2009 hit, Star Trek. If you saw The Hobbit over the weekend in IMAX 3D, you got to see the first 9 minutes of the film. Today the teaser trailer that was supposed to show with non-IMAX screenings of The Hobbit went online with a little surprise hidden in one of the shots. Are You The 1701? Find out after the jump!

At the 1:07 mark in the new Star Trek Into Darkness teaser, we see Benedict Cumberbatch’s character, John Harrison, in some sort of high-tech holding cell aboard the Enterprise. To the right of this shot, there are some readouts and other screens, but if you don’t look carefully, you’ll miss the web address that wasn’t there a second ago. As the the camera slowly pushes in on Harrison, AreYouThe1701.com suddenly appears over on the screen to the right. It’s so small and happens so fast that you most likely did not pick up on it (I know I didn’t). 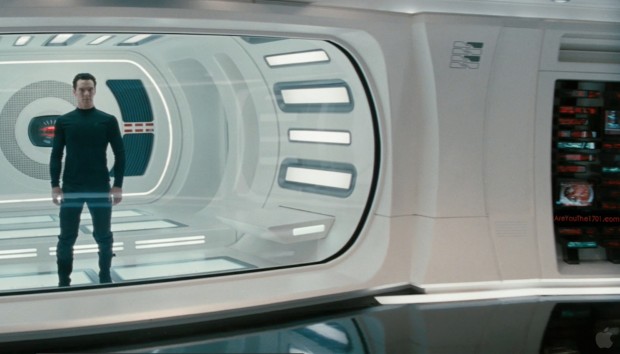 AreYouThe1701.com isn’t much right now, but if you click on the set of grey circles, you’re taken to a page to sign up for more information and to be contacted when “the search begins”. You can then like their Facebook page and follow them on Twitter. What do you think they’ll be searching for? Let us know in the comments below!

Thanks to Anton Volkov (@antovolk) on Twitter for the tip!