Trailers Weekly is a feature in which we bring you the most popular and talked about trailers of the week. Sharing trailers is a classic viral practice, and trailers are still the most mainstream way for people to learn about movies. It’s a brand new year and that means we are getting brand new trailers, so prepare to be excited for some very big films and a few indies too. This week we have trailers for A Good Day to Die Hard, Hansel & Gretel: Witch Hunters, Evil Dead, Foosball, and Side Effects. Hit the jump to see them all.

Foosball
The last time we saw a trailer for Foosball, it was an unpolished teaser. Now we have a new trailer that looks more clean and sleek than the last. Juan Jose, the director of the 2009 Academy Award winning Best Foregin Film, is behind this animated flick, which follows a boy and his path to becoming the best Foosball player in town. The film currently has no US release date.


A Good Day To Die Hard
Another day, another Die Hard trailer, except this one looks like its going back to its roots. Of course there are a few splashes of CGI here and there, but overall it looks like the Die Hard we all know and love. Bruce Willis returns to play John McClane and Jai Courtney will play his son Jack. A Good Day To Die Hard opens in theaters on February 14.


Hansel & Gretel: Witch Hunters
It’s really hard to take a film like this seriously, especially when the film doesn’t even know whether or not to take itself seriously. There are times were this film acknowledges its silliness, but other times where it tries to strike a dramatic tone. It really looks dysfunctional, but we’ll have to see if it can work. Hansel & Gretel: Witch Hunters opens in theaters January 25.


Evil Dead
The first Evil Dead trailer has a bunch of nods to Sam Raimi’s original. However this trailer is more tuned to Fede Alvarez’s style. There’s blood, guts, creepy threats, and moments where you will just cringe. It honestly makes the original look like My Little Pony. Evil Dead opens in theaters on April 12.


Side Effects
In what may be one of Steven Soderbergh’s final films, Side Effects follows a New York couple (Channing Tatum & Rooney Mara) trying to have a stable relationship. When it is discovered that Mara’s character may be the root of the problem, their therapist (Jude Law) offers a presciption drug to alleviate some of the pressure off her. Little does she know that it comes with some unexpected side effects, which results in some scandalous and deadly affairs. Side Effects opens in theaters on February 8th. 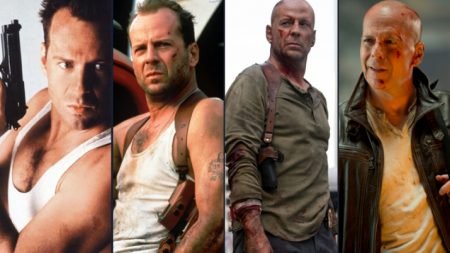