The Upper Footage is a documentary opening on January 31st in a limited New York City theater run (buy tickets here). As stated by their IndieGogo page, the film is an edited version of 393 minutes of footage recovered from the night of December 28th, 2009 in which a group of young socialites were involved in the death and cover-up of a young woman. While the filmmakers claim this to be real (the woman’s face and true identity are withheld in the film), there has been a lot of speculation over the years. Get the details after the break, including how you can win a pair of tickets.

Supposedly, this woman “Jackie Spearo” went missing after a party that included drugs, overdosing, and high profile attendees. Crushable has a great breakdown of the documentary’s intriguing and complicated history, but the video below gives you the highlights.

The Upper Footage website provides an interactive timeline of events to also help you piece together the supposed extortion plot, Hollywood interest (including Quentin Tarantino), the questions of the footage’s validity, and more. The whole marketing campaign has been built around the “real or not real” question, but they have also recently gone low tech viral by posting these flyers around NYC. 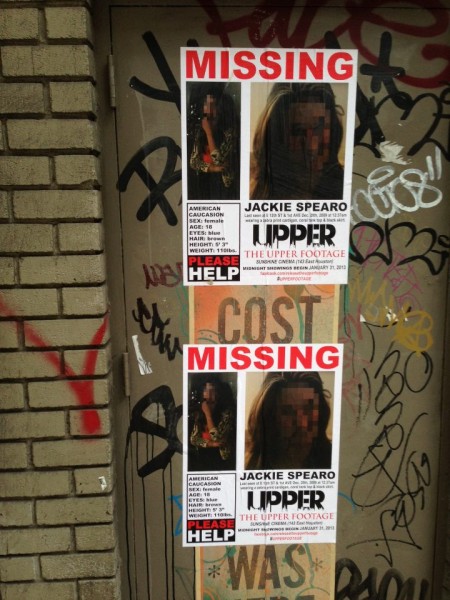 So, how can you win a pair of tickets? The first person to Tweet us (@MovieViral) with #upperfootage wins. It’s that simple! You’ll get 2 tickets to the NYC screening of your choice (1/31-2/9).

Thanks to Jake Williams via Email for the tip on the movie.

Watch The First Six Minutes Of “The Upper Footage”

Watch The First Six Minutes Of “The Upper Footage”