In the year 2073, after an alien nuclear war, drones scour the planet for natural resources for the surviving humans. It’s your job to defend the drones from the remaining aliens. That is the premise of Drone Defender, a free mobile app for iOS and Android devices based in the world of the upcoming sci-fi movie Oblivion. See the app description after the break, along with some photos.

ALIENS ROAM AN UNRECOGNIZABLE EARTH
The year is 2073 and the Earth is almost completely destroyed after decades of an alien nuclear war. These enemy aliens are trying to gather enough firepower to take down the mechanical harvesters that are collecting the planet’s resources for the surviving human race. Your mission is to maintain the Drones that protect the harvesters.

DEFEND THE DRONES
The enemy has managed to shoot down several Drones. If they collect the fuel cells from any Drones, your mission will be jeopardized.

PILOT YOUR SHIP
Patrol the zone in your ship high above the desolate remains of New York. Avoid being shot down and stay clear of the radiation outside of your zone.

FEATURES
•One-touch control to pilot your ship. Weapons auto fire once an enemy is in your target mark.
•Double tap to turn your ship 180 degrees in the air, just like in the movie.
•Earn points and compete with others with Game Center integration
•View detailed images of your ship, the Drones and enemies featured in the new movie OBLIVION.
•Adjust your ship’s sensitivity controls 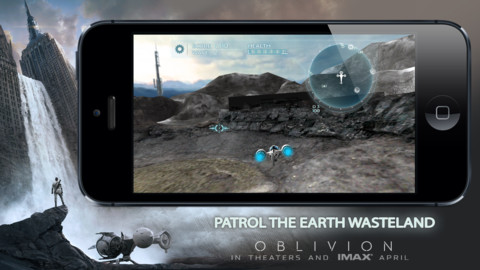 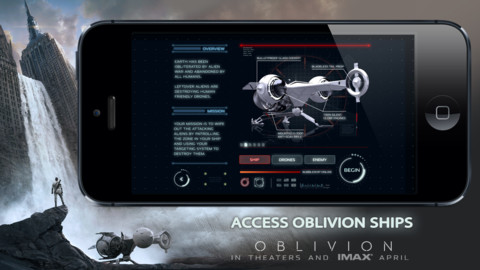