Warner Bros. and DC Entertainment’s newest animated feature Superman: Unbound premiered at WonderCon 2013 this weekend. The film be released on Blu-ray and DVD on May 7th, but you can read my review right now.

Superman: Unbound, directed by James Tucker and written by Bob Goodman, is an adaption of Superman: Brainiac, a five book story arc written by DC Comics Chief Creative Officer Geoff Johns. In the film, Superman (voiced by White Collar‘s Matt Bomer) fights a robot that he learns from Supergirl (voiced by Castle‘s Molly Quinn) is a Brainiac probe. Brainiac (Fringe‘s John Noble) tries to gain all the knowledge in the universe by destroying planets after stealing their major cities and shrinking them for storage. He did this with Krypton’s Kandor, and the only reason he didn’t destroy Krypton was because the planet was about to meet its own natural demise. So, Superman goes after Brainiac before he can come to Earth. 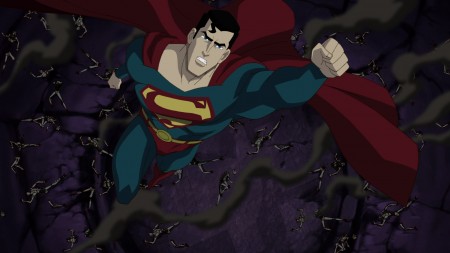 The best part of the film is the characters. All the voice acting is spot-on, including Castle‘s Stana Katic as Lois Lane. We get to understand Kara aka Supergirl a lot more here than in anything else I’ve seen, especially when it comes to her PTSD from the first Brainiac attack. The relationship between Superman and Supergirl is explored without too much exposition. A look here and there says a lot. We even get to dive into Clark and Lois’ romantic relationship, which they are keeping secret despite Lois’ complaints. Noble brings the gravitas that Brainiac needs, and I like that Bomer raises Clark’s voice up a bit to differentiate it from Superman’s more imposing inflection.

The visuals are nothing to scoff at either. The animation style is not one I’m accustomed too, so it took at while to get used to it. However, it works well for the film and allows for some more intense action than you might see in other (non-Batman) DC animated films. Also, you might note that the film is rated PG-13 for sequences of violence and action, and a rude gesture. That “rude gesture” is particularly hilarious, so look out for that.

Overall, this is a solid entry into the Superman mythos, especially if you’re looking for a little humor and relationship exploration.