With its recent Clue-centric episode, where people could vote for the ending, it’s obvious that the USA Network detective comedy , Psych, does a great job of being interactive with its fans online. The upcoming episode involving the wedding of characters Carlton Lassiter & Marlowe Viccellio is no exception. Find out how you can be invited to the wedding after the break.

As a way to promote it’s upcoming episode on Wednesday, April 10th, the Psych‘s Facebook fan page created a Facebook event for the wedding that happens on the show. On their page they posted this about the event:

You are cordially invited to Carlton & Marlowe’s special day on Wednesday at 10pm. Join us for a wedding you won’t soon forget. Click here to RSVP now and don’t forget to leave a message for the happy couple.

Here’s the wedding invite picture they posted on their page: 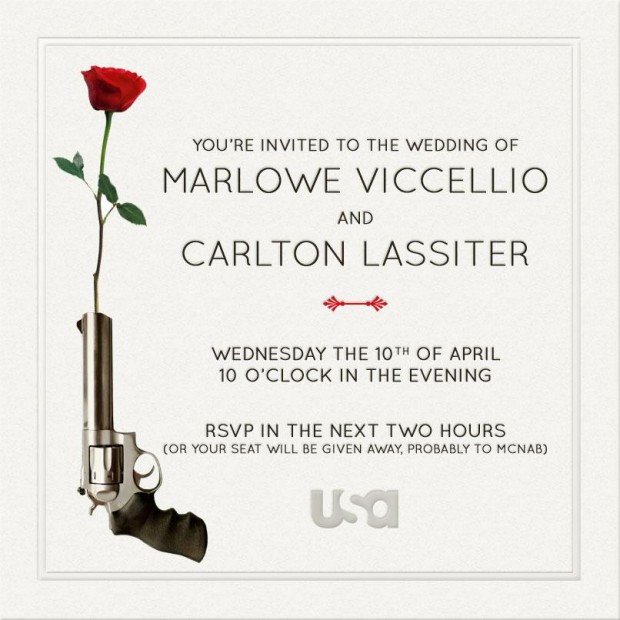 If you’d like to RSVP the event, you can go to their Facebook Event here. The official synopsis of the episode from the Psych site is as follows:

The gang spends the weekend at a casino resort for a wedding and crosses paths with a local crime boss whose presence jeopardizes the impending nuptials. Check out “Deez Nups”, guest-starring Sage Brocklebank, Kurt Fuller,Kristy Swanson, Mike Starr, Cocoa Brown and Pete Gardner.

The new episode of Psych airs on Wednesday, April 10th, at 1o/9 pm Central. For more info about the show you can check out the official Psych site, like them on Facebook and follow them on Twitter.