Over the past couple of weeks, we’ve seen big international marketing operations for several of this summer’s big blockbusters, including Star Trek Into Darkness. TrekMovie has come across some information that suggests that Paramount is getting ready to shift its focus and start promoting the film more here in the U.S. and Canada, which includes plans for the long dormant Are You The 1701? viral site. Hit the jump to read (and see) some of what’s coming!

Paramount has released four trailers for Star Trek Into Darkness, two are full-length international trailers while the other two serve as “domestic” teasers. Next week, we can expect the first domestic trailer for the film. The most recent international trailers included hidden links to a new poster, each in a specific country’s language. Be sure to look closely when watching the domestic trailer, as there could be hidden links to our official one-sheet. Below you can see the international one-sheet released on Monday and the “cinemosaic” version released today. 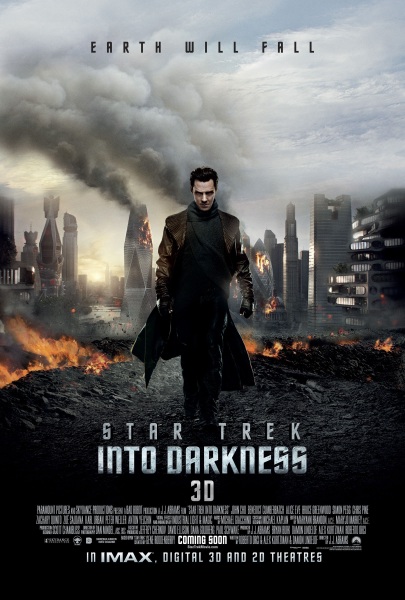 Paramount is partnering up with various companies to help promote the film. We’ve already seen a lot from Esurance’s Facebook page, but next week Mazda will start airing co-branded ads that are Star Trek-themed featuring their new Mazda 6 and SkyActiv technology (what does that even mean, “SkyActiv”?).

Paramount is also said to be getting traditional TV spots ready to start airing next week. Two have aired already, the Big Game Spot which aired during the Super Bowl and the “sneak peek” during the season finale of The Walking Dead (which you can see below).

With all of this activity beginning next week, you can expect to see a lot of missions pop-up on the Star Trek app which has really served as a viral campaign for this film. We can speculate that you’ll be asked to scan a photo of the new poster or Mazda billboard. Perhaps even scan the audio of the new trailer among other things. The Star Trek app is also letting you buy tickets for IMAX 3D “Fan Sneaks” which will take place on May 15th at 8 PM.

Do you remember Are You The 1701? We almost forgot about it too. Not much is known about the mysterious site that appeared late last year, except that this is the actual viral campaign for Star Trek Into Darkness. Expect to finally get notifications about the “hunt” hinted at when signing up on the website next week after the release of the trailer.

Many exciting things are on the way, so be sure to check back as MovieViral will have all the latest information!