Want to know a great way to get me interested in something? Add the name Eli Roth to any part of it and I’m sold. If one of the most iconic horror directors and one of my personal favorites is interested enough in being an executive producer on something, then I see no reason why I too shouldn’t want to check it out. And that is exactly what has brought my curiosity to the new original series for Netflix, “Hemlock Grove”. While the full series is not available until this coming Friday, we at MovieViral got a sneak peek at the first three episodes. Keep reading to find out my thoughts. MINOR SPOILERS to follow.

The show takes place in a small town where the murder of a high school student has everyone wondering how and what happened as she clearly was not killed by any human being. Visually we already can tell that we are not looking at a typical television show as with Netflix we get to view and hear a lot more. But is that going to be enough? In a world where I no longer fear the wolves and vampires thanks to Twilight, what do I really care about seeing more? The show gets off to an extremely slow start with poor dialogue and characters that seem phony and quickly thrown together. The settings are bright, the scene changes seem out of place and the acting is far from on. And this is just episode one. 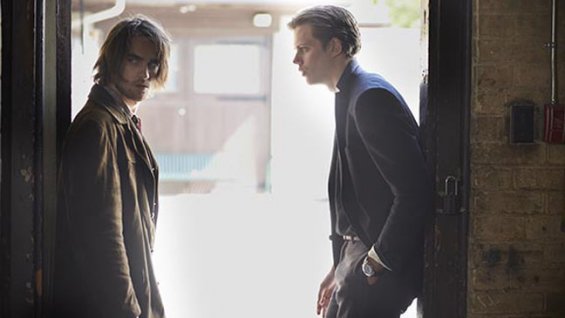 Your main characters at this point are a smooth talking socialite vampire who for some reason still goes to public school and I think is dating his cousin, while on the other side of town, gypsies move into town. Let me rephrase that. Gypsy werewolves who sell drugs move into town. Within in minutes of the death of the student, these two come together in pointing fingers as to who killed her. They begin to realize that they are each not your typical everyday high school student so they have nothing else to do than hang out. Oh I know, it’s a gripping story that you must be saying to yourself “how can I NOT want to check this out”. I spent most of the episode telling our executive editor Dan, via text that I was far from thrilled. Come on Eli. You have to be with this for a reason. So will the other episodes be any better?

Well, not really, but it takes some of the focus off of those two for a bit and now we get a little more story. Ok actually we get this….We have hot moms who age well, other moms who do not, drug usage, giants, squeaky underage girls who enjoy the woods alone, bumbling cops and people trying to find out pasts and it just goes on and on without really keeping me interested. Yes, I said giants which isn’t necessarily exact, but I don’t know what else to call it. The only thing that was truly good about these first three episodes is the werewolf transformation. With dramatic music playing at the same time this bloody change was taking place, it was the first real piece of excitement. There’s truly only one iconic transformation of a man into wolf (American Werewolf in London) but this one will make a good impact. It’s not quite the same, but it helped possibly drag me back for at least episode four. POSSIBLY.

It’s one of those things that since I have already invested my time I will more than likely continue to watch it, but not because I like it. I mean I really do not like it at all. Make sure you come back here after you watch it and tell us your thoughts. And in the meantime, here are some interviews with Dan and the cast and crew at this past Wondercon.