The viral campaign for Neill Blomkamp’s Elysium continues with yet another viral website. We already have a few viral websites at the moment, with ItsBetterUpHere.com and Armadyne.net, but now Sony has expanded the online world to include the Civil Cooperation Bureau. Get the details after the break.

In Elysium, the planet has become hazardous, so the rich and powerful live in a luxurious orbiting space station called Elysium, while the poor are left to suffer on the planet’s surface. The Civil Cooperation Bureau acts as the police force on Earth. The website goes into details on their operations, weapons & vehicles, enforcement technology, and even provides claims and forms (though they are experiencing a “system error” preventing you from downloading any of them). There are crime alerts on the main page as well. The Weapons & Vehicles and Enforcement Technology give us a glimpse at some of the tech that is featured in the film, including some you should recognize from the trailer. Check out the exosuit that Matt Damon’s character wears below. 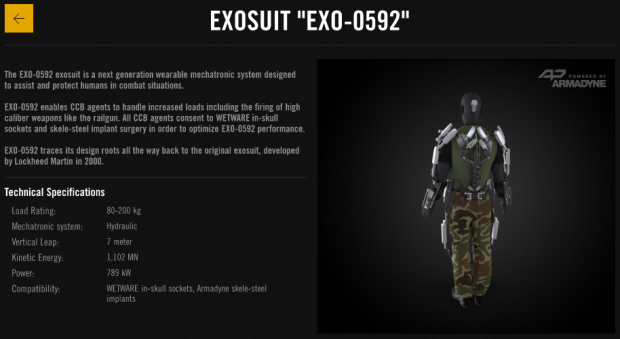 Some of the stuff is “classified”, so we’ll have to see if they expand on the content, or if that is just for show. Poke around the website yourself and let us know what you think. Elysium opens in theaters on August 9th.