For Tony Stark (Robert Downey, Jr.), the events that took place in New York during the finale of The Avengers were very traumatic. How do you deal with something like that? Medication, therapy? For the average person, maybe, but not Tony Stark. Keeping himself busy to keep his mind off of New York, Tony builds more and more Iron Man suits. However, his obsession is pushing away the one thing he truly cares about: Pepper Potts (Gwyneth Paltrow). But when a new threat in the form of The Mandarin (Ben Kingsley) reduces his personal world to rubble, Tony must rely solely on instinct and ingenuity to avenge his losses and protect the people he loves.

Returning are the core players, Robert Downey, Jr. as a haunted Tony Stark. When we last saw Tony, he was falling out of the sky after having tossed a nuke into a wormhole. That had to have screwed him up. Gwyneth Paltrow’s contract to play Pepper Potts expired with this film, but that did not detract from her performance as the Stark Industries CEO. Pepper and Tony are now in a much more committed relationship as they are now shacking up together, but that is tested when Aldrich Killian (Guy Pearce) enters the scene. More on him later. Also returning as Iron Patriot is Don Cheadle as Col. James “Rhodey” Rhodes. And of course Jon Favereau as Happy Hogan, who is now Head of Security at Stark Industries.

Aldrich Killian runs a privately-funded think tank called Advanced Idea Mechanics or AIM for short. Those familiar with the comic book version of this organization know that it is actuallyy a branch of HYDRA. Working with AIM is Dr. Maya Hansen (Rebecca Hall), a brilliant scientist who develops an experimental regenerative treatment called Extremis. Ben Kingsley rounds out the cast of newcomers as The Mandarin, leader of the terrorist group, The Ten Rings. 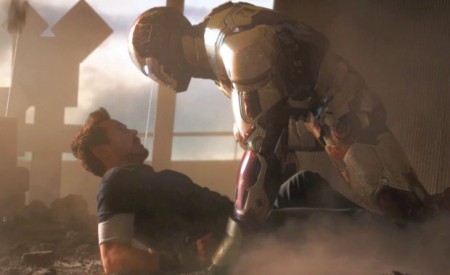 Taking over the director’s chair is Shane Black who brings a darker tone to the Iron Man franchise. It’s immediately noticeable as the film doesn’t open with a rock anthem from AC/DC, instead a monologue from Tony Stark about demons (no, not his alcoholism) that he created that he “never thought would come back to bite…” him. Black also has a writing credit with threequel veteran Drew Pearce. The duo produce a script that is witty and full of charm, but goes back to the basics, putting Tony back into the cave. It may contradict the whole “darker” movie image, but this is the funniest of the Iron Man pictures.

However, this film is not without its issues. The biggest problem here is that we are now in a post-Avengers world where everyone knows what happened in New York and are aware of the existence of aliens and gods. So why didn’t Tony call on the team to help out? Where was S.H.I.E.L.D.? The plan Marvel has set in place to show that these characters can survive in their own standalone pictures is bold, but in terms of the continuity of the Marvel Cinematic Universe, makes no sense. If not Captain America, at least S.H.I.E.L.D. should step in and provide back-up, no matter if Tony trusts them or not. 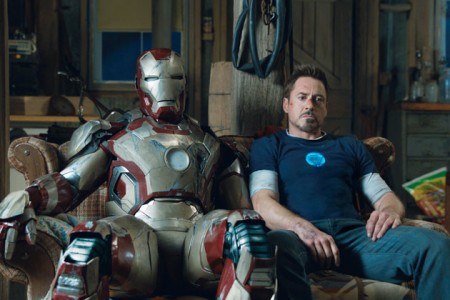 All in all, I enjoyed Iron Man 3. It leaves the franchise in a very, very interesting place. There is a twist that you’ll either find absolutely hilarious or you’ll hate it. Please do not Google this and ruin it for yourself. Trust me, I thought I knew what it was because the Internet started talking about it, but I was completely surprised. Also, this is a no-brainer, but sit through the credits for what I believe is the longest post-credits sequence on any Marvel Studios film.