Have you ever wanted to join the secret service and help protect the President of the United States? Well now you can, sort of, with the Secret Service Skills Test for the new Roland Emmerich action film White House Down. The test will help you determine if you have what it takes to join the elite ranks of the world’s most highly trained security force.  Get the details after the break.

Being the frontline of defense for our nation’s leaders isn’t exactly a job that just anyone can jump into. However, by using the new Secret Service Skills Test, you can be evaluated and ranked accordingly by completing the three distinct levels of testing needed to determine your skill set. 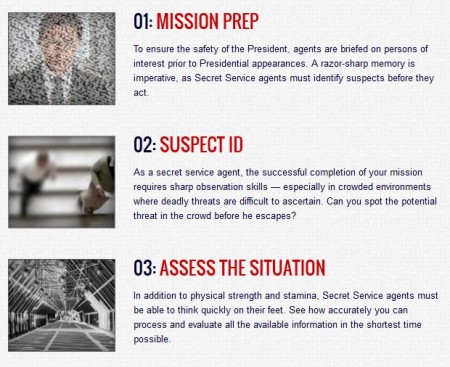 The first tier of testing will put your memory skills to the test, where you are presented with a number of mug shots (comprised of your Facebook friends if you are linked), where you must remember specific ones and identify them when prompted. The second tier has you watching a security feed where you must identify and pick out the suspect from a crowd. The third and final (and most difficult one I might add) tier will have you locating an internal threat by assessing a situation with only a handful of hints given. Once you are finished you will be given a rank based on time of completion and accuracy.

You can begin your career with the secret service by taking the Secret Service Skills Test here and find any other updates through the official White House Down Facebook page.

White House Down will be released theatrically on June 28th, 2013.