Although the Fast & Furious franchise is mostly known for its fast cars, exotic women, and massive explosions, it is also well known amongst fans for its strangely elaborate timeline. Continuity is something even the most well written film franchises have a difficult time with, but somehow the Fast & Furious films have succeeded where other more talented filmmakers have failed.

Now, in preparation for the upcoming Fast & Furious 6, fans of the franchise can dissect, or tune, the Fast & Furious timeline for themselves with the Timeline Tuner. Get the details after the break.

Using the Timeline Tuner, fans are able to break apart each film by selecting either their favorite film, their favorite character, or by other miscellaneous options. Once selected, you are given a selection of clips and images that relate to your selection. For instance, select Letty (Michelle Rodriguez) and you will create a highlight reel of her scenes from the first, fourth and sixth films (the only films she appeared in).

However, if you choose to pick the third film by itself then you will only have highlights pertaining to that film alone and the characters in it. Then, finally you can share your timeline with friends over Facebook and Twitter.

This is actually a really cool tool for those out there that want to get reacquainted with the series before going into the the sixth film. As silly as it sounds, knowing each film and their place in the timeline will actually make Fast & Furious 6 a much more fulfilling and entertaining experience.

You can open the hood and tinker around with the Timeline Tuner by clicking here, and keep up with all the latest fast and furious news by following the official Fast & Furious Facebook page. 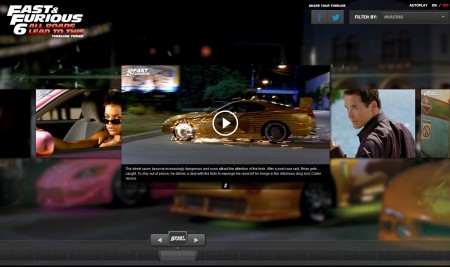