When the crew of the Enterprise is called back home, they find an unstoppable force of terror from within their own organization has detonated the fleet and everything it stands for, leaving our world in a state of crisis. With a personal score to settle, Captain Kirk leads a manhunt to a war-zone world to capture a one man weapon of mass destruction. As our heroes are propelled into an epic chess game of life and death, love will be challenged, friendships will be torn apart, and sacrifices must be made for the only family Kirk has left: his crew.

Star Trek Into Darkness is really the best picture I’ve seen all year, and I’m not just saying that to be saying it. What J.J. Abrams and his team at Bad Robot were able to accomplish, it is just breathtaking. Naturally, the stakes are much higher, but the story is much more personal. It really hits home in the current international and domestic political climate. Senseless acts of terrorism, the constant threat of war. That’s what this film is all about.

Chris Pine returns to the Captain’s chair as James T. Kirk. When we left Kirk, he had just been promoted to Captain of Starfleet’s brand-new starship, the U.S.S. Enterprise. However, was he really ready for that responsibility? Kirk cuts corners and has a hard time following the rules because he believes that he is above them. He allows himself to be guided by blind luck. Of course there’s only one man who can put him in his place… 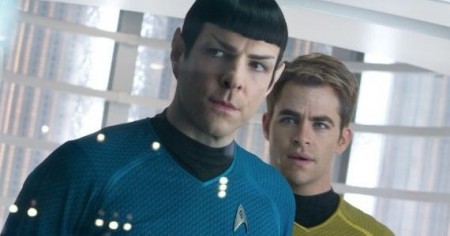 Zachary Quinto as Spock, our favorite half-human, half-Vulcan science officer. Spock, unlike Kirk, is level headed and follows the rules as his Vulcan heritage will not allow him to do anything but. As we know from Star Trek, Spock is not immune to his human emotions, and a certain John Harrison will put his resolve to the test.

Benedict Cumberbatch is a name many people will recognize from the BBC’s brilliant Sherlock. Here he takes a turn as the villain of the story, John Harrison. Harrison is a very interesting character who feels slighted by Starfleet, well actually, more like betrayed and there for takes his vengeance out on the organization. Cumberbatch gives a very powerful and quite frightening performance, a side of him fans have most likely never seen before. 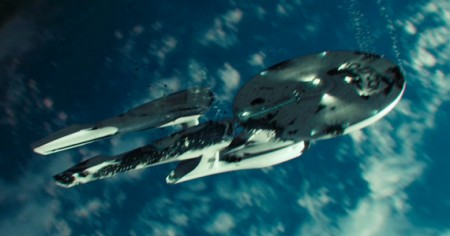 The screenplay is really well written by the powerhouse of Alex Kirtzman and Roberto Orci along with Damon Lindelof. The writers manage to make the scale of the film grander, but keep the focus on the characters and their relationships. The dialogue is witty and full of substance. When the characters crack one-liners, they aren’t just jokes, there is actually something to them. As expected, many references to the Original Series here which fans are sure to get a kick out of.

For “Into Darkness” J.J. Abrams made the wonderful decision to shoot with IMAX cameras. While Star Trek was released in IMAX theaters, the picture did not expand to fit the full height of the screen. “Into Darkness” features a lot of IMAX footage, mostly exterior shots and titles. Combined with the 3D, the effect really puts you into the movie. It cannot be stressed enough that this film needs to be experienced on an IMAX screen. I don’t even know how to convey that to you. If it was shot with IMAX cameras, see it in IMAX, that’s my rule.

Star Trek Into Darkness is now playing at a theater near you!