Warner Bros.’ Superman reboot Man of Steel is less than a month away, and much of the plot is still a mystery. Fortunately, DC has made available to Walmart advance ticket holders a prequel comic that gives a bit of insight to the film. For those who didn’t buy their special Walmart tickets, you can read the entire comic here. After the break, we’ll give a (spoilerish) review of the comic and how it might play into the movie itself.

The prequel comic is book-ended by Superman’s trip to Earth as a baby and his time on a commercial fishing boat, but the real star is Superman’s cousin Kara Zor-El (aka Supergirl). Taking place before the destruction of Krypton, we first meet Kara in a training exercise gone wrong, which leads to the first murder on Krypton in over a thousand years. We next see Kara as part of a crew for a scouting ship. However, things go wrong again (and for a similar reason) while the crew is in status, and Kara eventually crash lands on Earth.

We can speculate all we want about whether or not Supergirl is in Man of Steel, but we probably won’t get an answer until the film comes out. However, there is plenty of information in the comic that gives us other clues to the film. First of all, the interior of the scouting ship looks a lot like what we see Superman walking around in when he’s asking about his past. Could he have found Kara’s ship? The last panel of the comic seems to suggest he is looking for the ship, but why? And how does he know it’s there? Also, given the ship’s location, could this be his fortress of solitude? 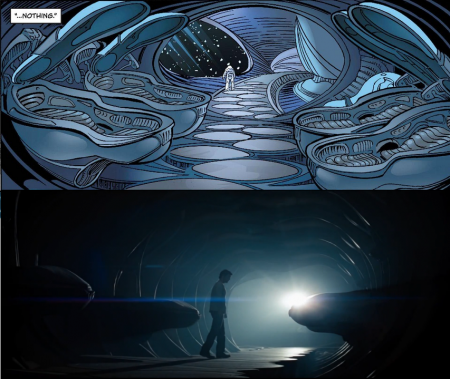 There is also some talk in the comic about terraforming. I wouldn’t be surprised if Krypton’s technology somehow comes back to bite them in the butt, thus causing the infamous destruction of Superman’s home world. Thanagarians are mentioned once as well, which could mean future appearances by the superheroes Hawkman and Hawkgirl. I’m sure there are plenty of other Easter Eggs, so let us know in the comments below if you find any.

Overall, it’s a good comic that gives us just a glimpse into the world surrounding Man of Steel, and we’ll hopefully get more given the comic’s numbering. If anything, this makes me want to see Supergirl on screen.