Are you in the mood for over 4 hours of large set pieces and an array of bare legs? Then you might be interested in today’s release of the 50th Anniversary 2-Disc Edition Blu-ray of Cleopatra

. Read our full review after the break.

The 1963 epic period piece from 20th Century Fox is probably more known for its infamous production than for the quality of the film itself. Cleopatra easily broke the record with a reported budget of $44 million. Adjusted for inflation, that is over $325 million today, thus making it still one of the most expensive movies ever made. There are several reasons for this, but the film’s six hour rough cut may have something to do with it. There were actually several cuts of the film, including two different 4+ hour cuts for the two premieres, and the 3 hour version shown in most theaters. This Blu-ray release gives us the 251 minute cut that is similar to the one shown at the New York premiere. 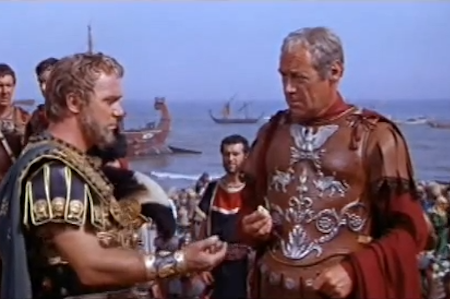 Let’s get to the movie itself. The story of Cleopatra is famous for its romantic and political twists and turns. The film spares no expensive detailing it all. Julius Caesar (Rex Harrison) chases his enemy Pompey to Egypt after the 48 BC Battle of Pharsalus. Caesar is wary of Pharaoh Ptolemy XIII after Ptolemy’s head is presented to him as a gift. Ptolemy’s exiled sister Cleopatra (Elizabeth Taylor) sneaks into Caesar’s chamber in a rug and convinces him to make her sole ruler of Egypt. Caesar falls in love with her, and the two have a child. When Caesar returns to Rome, he is now Dictator, but he wants to be Emperor and a God, thanks to a little convincing from Cleopatra. The Senate doesn’t like that very much, so they assassinate Caesar. Cleopatra flees back to Egypt, and eventually Marc Anthony (Richard Burton), Caesar’s only trusted friend, follows and two fall in love. This is partially what leads Anthony to becoming enemies with Octavian (Roddy McDowall), Caesar’s adopted son.

As you can imagine with a movie that runs over four hours long, this is an extremely oversimplification of the plot. There are a lot of nuances to the sweeping changes throughout the course of the film; even some that are unknown to the audience. The film is a bit bloated, but not as much as I expected for a film of that length. Cleopatra is more historically accurate than most period pieces, but that is its downfall as well. The biggest problem with the movie is that it doesn’t have any real direction or purpose. Fortunately, we are saved by solid acting and impressive visuals. The characters are not as developed as I would have hoped, but the big names behind them give them life. The production’s high cost may be in part due to its problems, but you can tell a lot of it went into the sets and costumes. The large sets both indoor and outdoor were beautiful, and they hold up well to the high definition of Blu-ray. 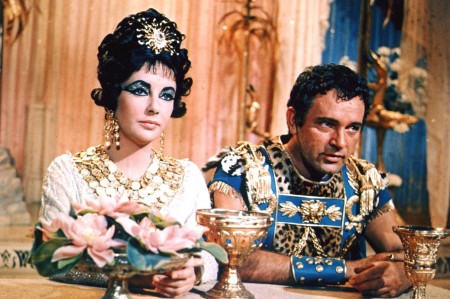 The above-mentioned production issues were not even the tip of the iceberg when it comes to the Cleopatra’s struggles to get made. There were firings and rehirings, romantic scandals, and much more. Fortunately, the Blu-ray doesn’t shy away from the infamy, and instead goes into all in much detail. The extras include a two hour documentary called Cleopatra: The Film that Changed Hollywood, which is the most thorough breakdown of how the film was made. The anniversary set has other featurettes as well, some from the era and some more recent. Overall, it’s quite an impressive collection of extras.

No matter your opinion on the movie itself, you have to respect that Cleopatra has been cemented into film history. The 50th Anniversary Blu-ray does justice to the film’s complete legacy, honoring it while not shying away from its troubled production. This is definitely a must-have for any film buff.