Arrested Development Season 4 was posted on Sunday to Netflix in its entirety. 15 episodes were posted, each based around one of the main characters in the show. Making references to the show before it was cancelled, bringing back older characters, and making new jokes for people to start quoting while they wait for the movie, this season was, as Buster (Tony Hale) might say, “off the hook!”. Check out the full review after the break (Warning: minor spoilers).

After seven years off the air, Arrested Development is back. While some people may say “Come on!” and believe it can’t be as good as the first three seasons, I thought that it held up to expectations and maybe a little more. Almost every single character was back in this season, even some who had appeared in only one or two episodes, like Gene Parmesan (Martin Mull) or the Richter quintuplets (Andy Richter). It almost feels like they never left, and having Arrested Development back feels right. Though all the characters are back, age has not been good to some of them, like Lindsay (Portia de Rossi), while others look exactly the same, like Tobias (David Cross).

Old jokes return, so anybody who plans on just watching this season without the first three may be a little lost. Although there is no banana stand, the stair car is still in the show, and even Michael gets a new car that’ll get him some “stares”. Buster’s line “I’m a monster!” gets a new meaning and his weakness to juice is also used. Tobias finally finds out that people think he’s gay, but that still doesn’t stop him from acting as he always has. Ron Howard, the narrator of the show, is also in it as himself for the idea of making a movie about the family. 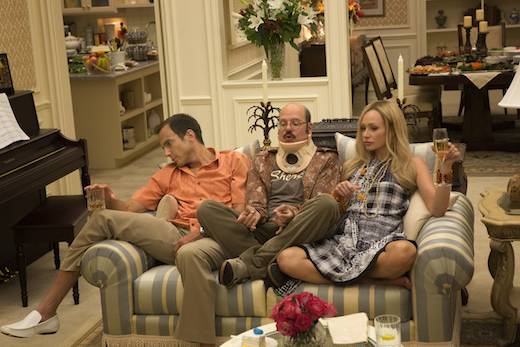 Since each episode is based around a single character, they don’t have to be watched in order, though I did anyway to avoid any confusion. The episodes are intertwined, so when you see Maeby (Alia Shawkat) running away from guards in Gob’s (Will Arnett) episode, you’ll understand why in her episode. This connection between episodes is confusing at times, but is rewarding when followed to the end and understood together. However, not everything is understood, and questions remain to be answered if this season gets a good enough reception to continue on with another season or a movie.

At the end of the day, I enjoyed this season. The jokes were funny, the cast was on its game, and the writing was excellent. Arrested Development even made fun of how it was off the air with a “Showstealer Pro Trial Version” watermark on older footage. At first, I was a little wary of how a new season could be after so long off the air, but the show pulled through and I think they’ll be able to continue with their story of a wealthy family who lost everything and the one son who had no choice but to keep them all together. It’s Arrested Development.’

Editor’s note: The above review was written by our reporter Binyamin Chuck Wallin.
Arrested DevelopmentNetflixReview