Mad Man has been described in many ways, and if you don’t believe me, just count the number of awards the show was earned throughout its televised run. But last night’s episode is the one that everyone seems to be talking about, something someone on facebook or twitter wold have clearly seen judging by the amount of Mad Men related posts that filled their news feeds. The last episode marked a change for the characters of the show. A new logo was revealed, and a press release was sent out, to everyone, including people who are fans of the hit AMC drama on Facebook.

If you are at all familiar with how press releases work, then the one you see below pretty much ball parks it. But there are a lot of things to look out for in this particular press release than just your average announcement. Hit the jump to find out how to have fun with a press release from Sterling Cooper & Partners. 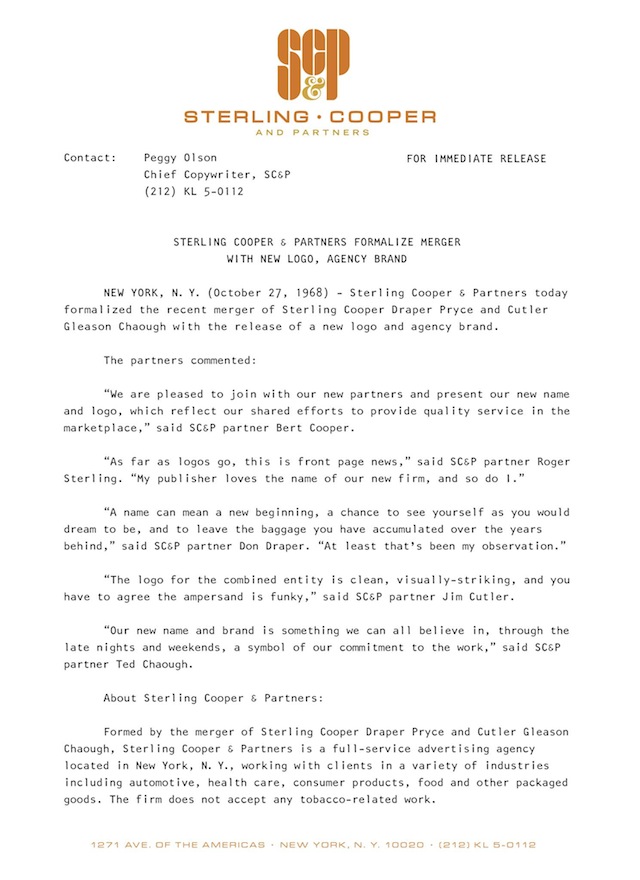 Film School Rejects was able to uncover a few fun things that you can do to enjoy the press release even more.

Among one of the things, trying to call Peggy. Which, ultimately failed for anyone who tried to do so. But let’s take a look at the 212-KL 5- 0112. Sure it’s a 555 number, and one that is normally reserved for fictional use, but there are some 555 numbers that can be dialed. It’s just a matter of finding them. Fact of the matter is, the 555 number was a popular number used by tv programming during the 1960s, so to see it again, and have it not dial out to any thing seems very appropriate.

Other things the site points out is that the address seen at the bottom of the press release is very much a real physical location. And that it’s not just an ordinary building, but one that has historical significance. Try googling it, and find out what the building is, you will be surprised.

The date also has huge historical significance as the year is remembered for civil rights demonstrations, the Summer Olympics, the launch of Apollo 7, and of course, the Vietnam War.

FSR provides plenty of more things to look out for in this one press release alone. But this is truly a fascinating press release to look at as the writers of the show took a lot of things into consideration when putting this all together.