Do you like the idea of The Hangover, but can’t relate to characters in their 30s? Well, 21 & Over, directed and written by Jon Lucas and Scott Moore, might be the film for you. Or is it? Read my review of today’s Blu-ray release after the break.

It’s Jeff Chang’s (Twilight‘s Justin Chon) 21st birthday, and his childhood best friends Casey (Pitch Perfect‘s Skylar Astin) and Miller (Miles Teller from Footloose) want to take him out to get drunk. Unfortunately, Jeff has a big interview in the morning, set up by his strict father (Francois Chau of LOST fame). Still, they convince him to go out, and Jeff eventually passes out from too much fun, and his friends don’t know how to get him back home. Hilarity ensues as the trio have to deal with a psycho sorority house, a psycho spirit leader, and an assume drinking challenge called the Tower of Power.

Doing a Hangover knock-off for the 20-something crowd sounds like a good idea at first, until you realize that The Hangover already covers that demographic. However, the film tries to be relevant to the younger audience by weaving in the universal subplot of childhood friends growing apart during college. It also deals with the pressures of being on the cusp of adult, most notably when to have the guts to stand up for yourself and do what you want. 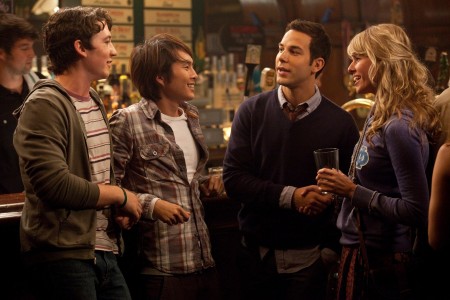 Unfortunately, all of these themes are stuck in a generic vulgar comedy that only warrants a few hearty laughs here and there, and maybe a couple more chuckles throughout. While the plot is extremely predictable, that is par for the course in these kind of comedies. The actors and their characters are likable enough, but the material is just not there for them. Miller’s blatantly racist and idiotic mouth vomit is occasionally funny, and Justin Chon plays a good drunk guy, but most of everything else felt forced.

If you’re looking for an Rated R comedy about the perils of getting wasted, you already know what movie (well, trilogy now) to watch. If you want a cheap knock-off that might remind you of being young again, then maybe check out 21 & Over. The Blu-ray has only a few extras, including a gag reel and two short featurettes.