LAFF 2013 Review: “The Conjuring” Stirs Up Plenty Of Scares And Strikes Fear Into Your Heart

Ever since Saw opened in theaters in 2004, James Wan changed his method of how to terrify his audience and fans. For the most part, the director has ditched the notion that you need to inundate moviegoers with gore and random pop outs, and used old school methods of building up the tension in the room and exposing the audiences’ fears when they least expect it. The Conjuring is very much like that, using practical effects over cgi and building a fearful anticipation. It isn’t the scariest movie of the century, but when it does scare, every fiber of your body will tremble with fear. Hit the jump for the full review.

Patrick Wilson and Vera Farmiga star as Ed and Lorraine Warren, the real-life husband-wife team of parapsychologists who made a name for themselves in the ’70s, with their cases being the basis for films such as The Amityville Horror and The Haunting In Connecticut. While taking their cases to various universities, the Perron family (Ron Livingston and Lili Taylor), move into a remote Rhode Island home, where they experience a wide array of disturbing events ranging from drops in temperature and mysterious bruising to seeing things that are not there. The family can no longer take whatever is haunting the house and look to the Warrens for their help.

The key to such a great horror movie is the cast’s ability to convey that horror that haunts the house. Wilson and Farmiga do a phenomenal job playing as the Warrens, while Livingston and Taylor play Roger and Carolyn just as effectively. Screenwriters Chad Hayes and Carey W. Hayes provide a deeper look into both families, patiently building the tension with sprinkles of scares at the beginning, which allows the audience to get more comfortable with the characters and have us sympathizing with them.

That emotional connection will be felt when only certain characters in the film are able to see the apparitions, while others, including the audience, will question it. This is an ingenious idea that builds the anticipatory fear, and once the audience sees it, they will be spooked. A lot of that has to do with how cinematographer John R. Leonetti shot the film. Unexplained instances of bruising, leg pulling during sleep, or animal deaths, leave a cold feeling of dread in the air while watching the film. 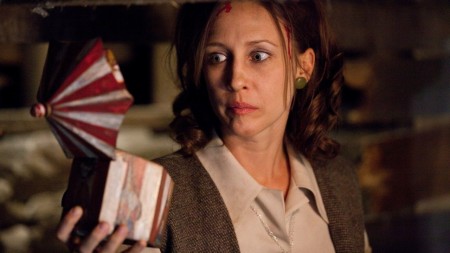 Wilson plays the strong husband and father figure who has seen the dark side from his cases and the affect it is having on his clairvoyant wife Lorianne. Farmiga is definitely the star of this film displaying a type of sensitivity and openness to understanding the family’s problems of trying to live with spirits. She endures most of the pain being the only one who can communicate with these spirits and seeing what her husband doesn’t see. She also displays the kind of courage you rarely see in a woman of the 70s. She has a strong will to see things through to the end, even though this particular case is having a heavy toll on her spiritually.

Livingston and Taylor are on the opposite end of that spectrum, playing as great parental figures, making it feel like everything they are going through are in fact real. Though Roger is a strong father-figure, Carolyn goes through a great deal of suffering both mentally and physically as she is the one who has to endure the most terrifying aspects of living in a haunted house.

There is a back story within the film involving the Warrens that I would like to see more of, and The Conjuring chooses to focus most of it’s attention on the Perrons; but it is their case after all. A room full of possessed trinkets, dolls, and statues that the Warrens like to keep leaves a lot of room for more of their cases to be adapted into film, which I hope Warner Bros. is highly considering. But there is one case that Wan only scratches the surface of during the film, which explains some of the Warren’s history and how it nearly tore them apart.

Then there are certain apparitions that seem to be thrown into the film for the sake of scares. But I could only think of one instance of that happening. This also goes for other useless characters like the skeptical sheriff or the tech geek trying to make a believer out of the skeptical sheriff.

But The Conjuring redeems itself by staying true to what Wan, Leonetti, and editor Kirk Morri’s know best, and that is how to scare an audience. The three have excellent attention to detail when it comes to crafting the scene well using just the right amount of room space, lighting, and sound. Add Joseph Bishara to the mix and you got yourself a frightful good time.

What also makes The Conjuring work so well is that the comedic relief never undercuts the tone of the film, in fact it just may make it even more scary. Even though the sheriff and tech geek’s sole purpose is to lighten the mood, they themselves go through a trial of fright that reminds us just how scary Wan can really be.

Wan displays a great deal of restraint and patience setting up the tone of the film. Audiences aren’t just thrust into a haunted house just for the sake of being scared. Wan wants you to feel as though the fear that the Perron’s felt and the Warren’s dealt with is real. He slowly crafts the fear using practical effects, who knew the simple act of clapping of hands could send chills down my spine. The Conjuring isn’t as relentless as I thought it would be, but there are plenty of scares to be had, and it is just enough to strike fear into your heart.

The Conjuring opens in theaters on July 19.