White House Down is the third in Roland Emmerich’s trilogy of films, where he unleashes his destructive tendencies towards the Presidential abode. He obliterated the White House via spaceship deathray in Independence Day, crushed it with an aircraft carrier in 2012 and now, in his newest action film, he wreaks DC havoc with all kinds of explosions, gunfights and military warfare inside and outside the residence at 1900 Pennsylvania Avenue. How does all this destructive mayhem shape up as a movie? Find out in my full review of White House Down after the break.

White House Down stars Channing Tatum as John Cale, a US Capital police officer whose main job is to protect the Speaker of the House(Richard Jenkins). He yearns for something more, primarily, a job as a Secret Service agent for the President. When he finally gets an interview at the White House for such a position, he takes his daughter along.  As a single dad, he hopes the trip will give him some brownie points with his daughter, because she’s a huge fan of President Sawyer(played by a restrained Jamie Foxx). While on the White House tour, a group of rogue paramilitary-types take over the building. Cale is separated from his kid in all the commotion and finds himself having to protect the President while trying to figure out a way to save his kidnapped daughter. 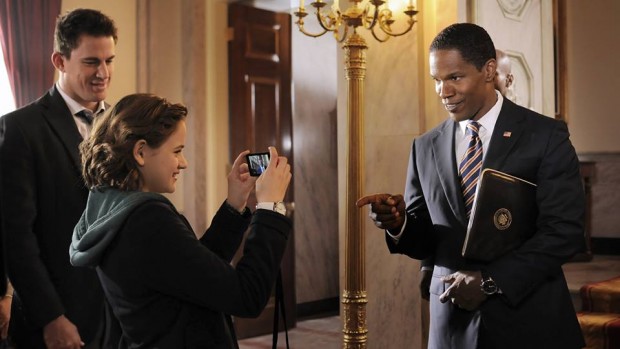 While the recent “White House under siege flick”, Olympus Has Fallen, took a more serious R-rated action approach, White House Down takes the more entertaining PG-13 buddy action film path.  This film could have easily been the next entry in the Die Hard film franchise. Considering the less than enthused response to A Good Day to Die Hard, this definitely could’ve been a more interesting story direction. White House Down probably follows the formula closer than most of the Die Hard in a “specific location” flicks. Channing even ends up in the obligatory Die Hard dirty white tank top by the end of the flick, but he still comes off as just a pretty boy John McClane wannabe. It’s like he wandered onto the set by mistake from some 80’s costume party. 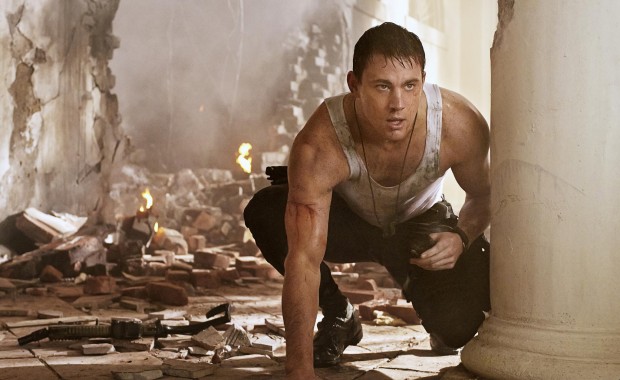 The movie only becomes entertaining once Channing goes into action hero mode and finally meets up with Foxx’s President character. To get to that point you have to meander through lots of bad dialogue that’s suppose to set up all the characters in the film. None of the conversations in the first twenty percent of the film feel that believable. There are more entertaining ways to create a basic foundation for the main characters’ motivations. Of course, once Foxx and Channing team up, White House Down becomes tolerable and much more enjoyable. Their on-screen chemistry drives the rest of the picture and delivers most of the laughs. Plus, the film is filled by a supporting cast of talented actors that you wouldn’t normally associate with a big action film such as James Woods, Michael Murphy, Maggie Gyllenhaal and Richard Jenkins.

My biggest frustration with the movie lies with many of the visual aspects. Due to not being able to actually film much of the picture at the real White House, there’s a lot of green screen work at play here. They also built an exact replica of the outside and inside of the White House for most of the scenes. In my opinion, there seemed to be an inconsistency between shots, when it came to the use of visual effects and the fake White House set as well as in the utilization of color correction. Many of the scenes that involved green screen didn’t look right to me and many of the external White House shots felt like it was on a set and not the real location. Even some of the computerized visual effects and scene tinting varied in levels of quality from shot to shot. It made the film seem almost unfinished in the visual effects department. Something I wouldn’t expect from a Roland Emmerich film.

Overall, White House Down is a serviceable entry in the fun summer blockbuster action genre, as long as you can make it through the film’s opening exercise in how to write bad dialogue and exposition. Once the action kicks into full gear and Channing and Foxx do their thing, it’s smooth sailing from that point on except for a few visual inconsistencies. If you’re looking for a somewhat decent mindless action flick, maybe, White House Down is the one to “Channing your Tatum.” Personally, I’d rather see The Heat again. 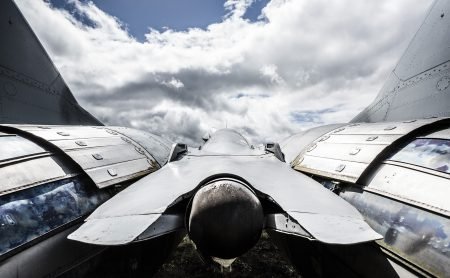