We’re just over a week away from San Diego Comic-Con. The full schedule is now up, and requests for press coverage are flooding in. After the break, check out the latest news we have on the convention, including some cool marketing for Godzilla.


Portions of the documentary film “Legends of the Knight” will debut at a SDCC panel on Friday, July 29 at 10:30am in room 26AB. The independent, not-for-profit film explores the inspirational impact of Batman and the power of heroic storytelling.

Filmmaker Brett Culp will be in attendance throughout SDCC and available for interviews.

The Trailer for the film can be viewed at: http://youtu.be/sf_7IsvXV-U, or on the official website: www.WEareBATMAN.com. Since its debut, the Trailer has over 160,000 views on YouTube.

“Batman has become contemporary mythology,” producer/director Brett Culp said. “We want to show how enduring stories like this shape us. Our goal is to inspire everyone on the planet who loves Batman to embody his spirit, engage with the world, and make a difference. Together, we are Batman.”

Over the past year, Culp and his team have filmed stories in 15 cities, recording 64 interviews. He has captured the stories of individuals whose love of the Dark Knight has inspired them to overcome devastating obstacles, to motivate and encourage young people, and to contribute to their communities.

Well-known Batfans who appear in the film include:

In the spirit of Batman, all revenues generated by the completed film that are beyond production, screening, distribution, and administrative costs will be donated to charitable organizations.

For interview scheduling during SDCC, contact Tricia at media@brettculp.com

SDCC Panel (http://sched.co/10EfESS)
“Legends of the Knight: Batman and the Inspirational Power of Heroic Stories”
Friday, July 19 at 10:30am – Room 26AB

PHOTO:
A collection of images from the film can be downloaded here: www.brettculp.com/legends/images.zip

“The Mechanic” is the first release of MovieMaze, a comedy adventure series for smartphones and tablets, which officially greets the world at Comic-Con San Diego July 17-21.

Created by UK-based Stickmen Pictures and Hollywood’s Leomark Studios, “The Mechanic” and later MovieMaze releases are comic multi-adventure movies aimed at the 13–30 demographic and designed as an app for use on all iOS and Android devices. Viewers watch a sequence and then select from a series of choices to advance the storyline, much like those classic Choose Your Own Adventure books and games of the 1980s, but now in live-action video. “And with 40 different in-app options,” says writer-director Rishi Thaker, “MovieMaze proves that smartphones and tablets can deliver interactive entertainment beyond animated games and reality shows.”

Available in September, MovieMaze is in an unofficial race-to-market against bigger productions like Fox’s “Choose Your Own Adventure” movie, which is still in development.

“We don’t have a huge marketing machine behind us, but we’re using our size to advantage,” says producer Erik Lundmark. “Because our team is small and focused, we’ve been able to take ‘The Mechanic’ from concept to market launch in five months. Try doing that at a big studio.”

“The Mechanic” star Jacob P Matthews will be on hand at Comic-Con preview night July 17, along with Thaker and Lundmark. Other cast and crew will make appearances throughout the convention. MovieMaze is located in booth 5535. Comic-Con International runs July 18-21 at the San Diego Convention Center, 111 W Harbor Drive, San Diego, CA 92101.

Partying will commence on Friday, July 19 from 1:00-4:00 p.m. with “Comedy Central Comedy-Con,” a free, first come, first served (21+) event at Float at the Hard Rock Hotel. COMEDY CENTRAL fans will have the opportunity to chill and interact with Blake, Adam, Ders and Kyle from “Workaholics,” Keegan-Michael Key and Jordan Peele from “Key & Peele,” David Herman, Tom Kenny, Natasha Leggero, and Jerry Minor from “Brickleberry,” comedian Chris Hardwick, among others.

On Saturday, July 20, COMEDY CENTRAL will be taping an original one-hour stand-up special with Patton Oswalt at Spreckels Theatre located at 121 Broadway in downtown San Diego. Tickets to the 8:00 p.m. and 10:30 p.m. tapings are available at www.spreckelstheatre.net.

In addition, comedic performances are taking place at the Balboa Theatre located at 868 Fourth Avenue including Amy Schumer on Friday, July 19 at 10:00 p.m., “Key & Peele,” Keegan-Michael Key and Jordan Peele on Saturday, July 20 at 7:00 p.m. and Chris Hardwick on Saturday, July 20 at 9:30 p.m. Tickets are available at www.ticketmaster.com.

• Thursday, July 18: “Workaholics” panel (Indigo Ballroom at the Hilton Bayfront Hotel)
2:00-3:00 p.m. It’s time to GET WEIRD with COMEDY CENTRAL’s hit series “Workaholics!” Whether it’s Blake dressed in a bear coat, Adam singing about Catherine Zeta-Jones while on shroomz, or The Ders celebrating his birthday with a drinking triathlon, the boys always seem to run into trouble wherever they go. Join stars, co-creators, writers, and executive producers Blake Anderson, Adam Devine, Anders Holm, and Kyle Newacheck as they go behind the scenes and give a sneak peek into next season, including a few special surprises that are guaranteed to be ‘Tight Butthole…S’Go!

Last, but not least, we have some viral marketing for Godzilla at Comic-Con already. It looks like Legendary Pictures has taken over a warehouse and made it look like the giant lizard had caused some destruction to it. Check out the Twitter pics below, courtesy of Shock Till You Drop. We’ll see what more Legendary has to offer when we’re down there. 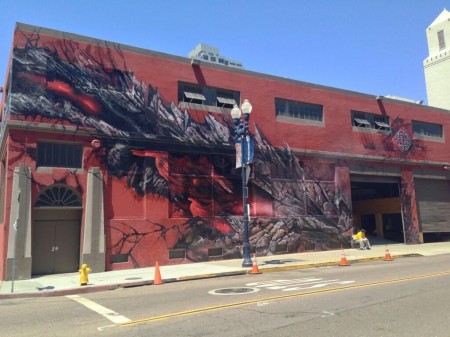 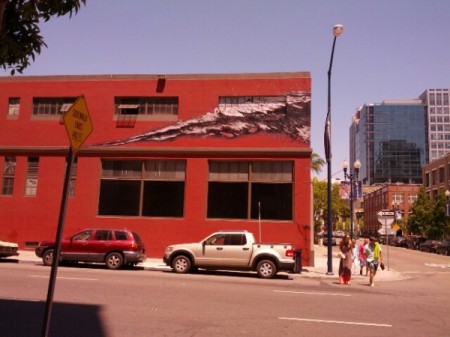