Encounter “Godzilla” When It Makes Landfall In San Diego!

Some strange events have been occurring in Japan over the past few hours. A Japanese fishing boat, heading for San Diego, went missing after hitting what is described as a “black iceberg.” A member of the Citizen Weather Watch has reported “deep sea seismic activity” sending giant waves from Tsujido Beach in Japan all the way to Pacific Beach in San Diego. What does this all mean? Godzilla is coming. Get more details after the jump!

Earlier this week, photos of a warehouse in Downtown San Diego surfaced on Twitter, showing damage done by…something, as well as the Legendary Pictures logo. 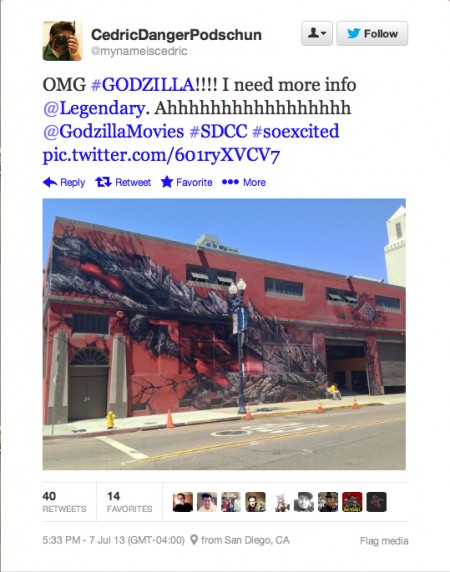 It is known that Warner Bros. and Legendary Pictures will be showcasing Godzilla during their panel in Hall H this year, but could there be an event outside the Con as well? El Mayimbe thinks so, tweeting: “I’m hearing at Legendary #godzilla event on Wednesday they will showcase Godzilla coming out of the ocean!” Today, a Tumblr titled “Godzilla Encounter” appeared, and posted two screen shots of news reports, one from The Osaka Tribune and the other from the Citizen Weather Watch (see below). You may also sign up for updates from Legendary on the page. 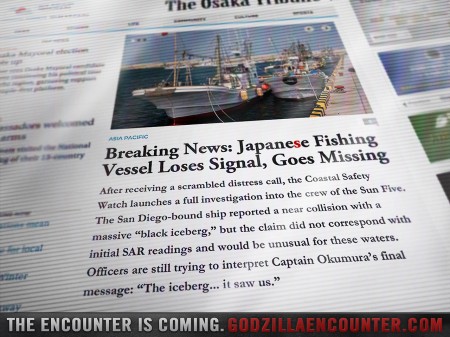 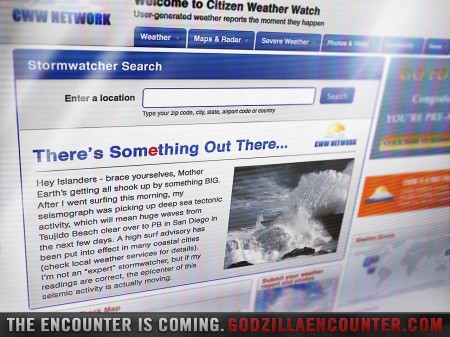 If you notice, in each picture, one letter is highlighted red. Could it be a code? We’ll keep our eyes on this in the remaining days leading up to Comic-Con, so be sure to check back for updates!