Kaiju organs are big business in the world of Pacific Rim and in a pretty cool viral campaign just before this film opens nationwide this Friday, black market business man Hannibal Chau has sent out some rather interesting items to an assortment of internet establishments to help promote his entrepreneurial endeavors.

Discover the mysterious contents of these briefcases and watch an infomercial with Chau himself explaining the benefits and breakthroughs in medicine with the use of Kaiju organs after the break.

Early in the morning on July 2nd, multiple websites such as Slashfilm.com and Comingsoon.net began receiving silver briefcases filled with sample Kaiju organs sold by Hannibal Chau, a black market salesman played by Ron Perlman in Guillermo Del Toro’s upcoming monsters versus robots opus, Pacific Rim. These deliveries coincided with a viral video, which we featured earlier and you can find embedded below, featuring Chau where he breaks down the many medicinal uses these rare organs have, ranging from cures for Lactose Intolerance to Attention Deficit Disorder. 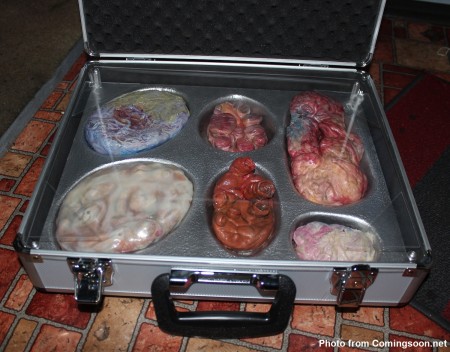 As for the briefcase and its contents, you can see in the image to right that it appears to have six different organ types all nicely packed together. Along with the organs there is also a brochure for Chau’s business where it outlines the different remedies each organ provides, such as Kaiju Bone Powder, Elector-Bile Bags and Flaky Cakes.

It’s these little extras that really get you hyped for the film and yet another shining example as to why Guillermo Del Toro is in a league of his own when it comes to creating fantasy worlds rich with character and filled with personality that most others can only dream about. While it’s sad that most of us will never have an opportunity to obtain these neat marketing bits of swag, it’s still pretty cool that they exist at all.