Thanks to a shipping error, I am now currently overstocked on San Diego Comic-Con press releases, and I am passing the savings on to you! After the break, check out our latest news on the convention, and read all our coverage here.

The Ice King must be stopped – and San Diego is where it will happen. Cartoon Network Enterprises, the licensing and merchandising arm of the television network, today unveiled plans for the 2013 Adventure Time ConQuest, which will take place during Comic-Con International: San Diego. The epic quest will send fans of the popular Cartoon Network animated series on a treasure-filled journey throughout the San Diego Convention Center and surrounding areas, while they attempt to save Princess Bubblegum, Lumpy Space Princess, Hot Dog Princess and many others from the obsessive clutches of Ice King. Save the princesses and capture the Ice King, and victors of the search will be handsomely rewarded with a limited-edition keepsake that will only be given to those brave enough to embark on the challenge.

To participate in the Adventure Time ConQuest, fans must visit any of the 14 participating partner booths and locations listed below or head to the Cartoon Network booth (#3735) and look for signage to begin their journey. Along the way, they’ll also receive incentives, premiums and rebates for some of their favorite Adventure Time products featured throughout the con. Participating partners in this year’s ConQuest include:

§ Abrams (Booth #1216) will have a limited-quantity of its upcoming book, Adventure Time Encyclopaedia, available for sale at its booth, as well as an all-new 2014 calendar featuring title card art from the series.
§ Boom! Studios/KaBOOM! (Booth #2235) will feature the latest issues of its top-selling Adventure Time comic book series and related mini-series!
§ D3Publisher (ShifyLook Freeplay Arcade at Hilton Gaslamp Quarter) will treat fans to the first-ever, hands-on demo of this fall’s upcoming video game, Adventure Time: Explore the Dungeon Because I DON’T KNOW!, the brand’s first-ever multiplayer console release, available this fall.
§ Entertainment Earth (Booth #2343) will offer a great Adventure Time Tin Tote Gift Set Convention Exclusive that includes a colorful metal tin tote, a 16-ounce themed travel mug, and a set of four coasters that will take you to the Land of Ooo.
§ Funko (Booth #5343) will feature its collection of must-have Adventure Time POP! vinyl figures.
§ Hallmark (Booth #2913H) will display its all-new Finn & Jake commemorative Keepsake Ornament, available this holiday season, as well as cards.
§ Huckleberry (Booth #3449) will preview its unique, all-new Adventure Time Chara-Cover phone cases for the first time during Comic-Con, with the products available for sale later this year.
§ Jazwares (Entertainment Earth Booth #2343) will feature its Adventure Time Lady Rainicorn and the Pups feature plush Convention Exclusive at the Entertainment Earth booth.
§ Mimoco (Booths #5338 & #2913M) will feature its full line of Adventure Time x MIMOBOT USB flash drives, including this year’s Comic-Con exclusive, Ice King (LTD.ED. of 850!) and the brand new Marceline, alongside Finn and Jake.
§ Penguin Group (Booth #1028) will showcase its line of MAD LIBS®, activity books, journals and much more based on Adventure Time, and will be giving away free buttons, while supplies last!
§ Poketo (Booth #5050) will launch a new collection of artist-inspired wallets featuring Adventure Time characters and worlds from the series.
§ Rubie’s Costume Company (Booth #3649) will display its line of Adventure Time costumes – for fans of ALL ages, available this Halloween – and great for cosplay!
§ USAopoly (Booth #721) will showcase The Land of Ooo with iconic MONOPOLY® and MEMORY® CHALLENGE Adventure Time games. Both games are available at retailers such as Comics-N-Stuff, Toynk, FYE and Barnes & Noble.
§ WeLoveFine (Booth #5647) will offer up a wide assortment of its fan-favorite Adventure Time apparel, including several exclusive designs on t-shirts and fashion leggings.

All Adventure Time fans are encouraged to participate in the quest and claim their reward, which will be available for a limited time while supplies last each day.

Additionally, on Friday, July 19 Cartoon Network will host an Adventure Time panel in the Indigo Ballroom at the Hilton Bayfront featuring the series’ cast and crew dishing on behind-the-scenes secrets, probably giving away some spoilers, and answering fans’ burning questions. The panel, which will be from 11:00 a.m. – 12:00 p.m. is scheduled to include series creator Pendleton Ward (Lumpy Space Princess), Jeremy Shada (Finn), John DiMaggio (Jake), Tom Kenny (Ice King), Olivia Olson (Marceline), Kent Osborne (Head of Story) and Adam Muto (Supervising Producer). Fans can also check out the Cartoon Network booth on the convention floor to get an inside look at the Ice King’s lair, grab some exclusive giveaways and much more.

Who: Award winning special effects artist and director as well as Cinema Makeup School guest lecturer and teacher Rod Maxwell, a former contestant on Syfy’s Face Off, will be on hand to put principles into practice as he transforms an innocent human into a scary monster!

What: Visitors to the International Children’s Festival at San Diego Comic-Con can see Rod as he creates a unique “Strawberry Flavor Monster” transformation. In a process that can take 4-6 hours, watch makeup impresario Maxwell take an innocent human being and turn him into a scary monster through the magic of makeup, prosthetics, sculpting and design.

The Flavor Monster transformation is inspired by a mobile game created by truth® – the nation’s largest youth smoking prevention program. Developed as part of a comprehensive campaign to reach teens and young people about the dangers of flavored tobacco products, the Flavor Monsters game transports users into a not-too distant future where “flavor monsters” – representing the added flavors in tobacco – are attacking Earth. Players work to defeat these monsters, thereby stopping the monster invasion. Visit http://www.thetruth.com/games/flavor-monsters/ to learn more.

Rod previously performed this magical transformation at New York Comic Con, but now you can see it for the first time in San Diego! Visit http://www.thetruth.com/art/flavor-monster-transformation/ to see how the process works. 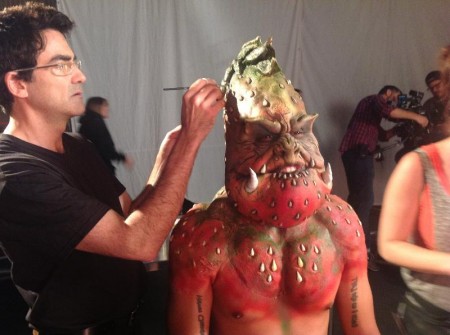 ABOUT SAN DIEGO INTERNATIONAL CHILDREN’S FILM FESTIVAL
The 10th annual San Diego International Children’s Film Festival takes place in July and August 2013. The festival will screen more than 100 short films and animation from around the world 1 at Comic-Con International and at the Carlsbad City Library, with more exciting venues announced soon. Screenings are free for everyone. Visit www.sdchildrensfilm.org

ABOUT TRUTH
truth® is the largest national youth smoking prevention campaign and the only national campaign not directed by the tobacco industry. The campaign exposes the tactics of the tobacco industry, the truth about addiction, and the health effects and social consequences of smoking. truth gives teens facts and information about the tobacco industry and its products, allowing them to make their own informed choices about tobacco use. Research-proven as an effective public health intervention, the campaign is credited with keeping hundreds of thousands of teens from starting to smoke. To learn more, visit www.thetruth.com.truth is directed and funded by Legacy, a national public health foundation located in Washington, D.C. Legacy was created as a result of the November 1998 Master Settlement Agreement (MSA) reached between attorneys general from 46 states, five U.S. territories and the tobacco industry. To learn more about Legacy’s life-saving programs, visit www.LegacyForHealth.org.

As Comic Con quickly approaches us next week, we wanted to send a reminder about all of the excitement happening as HISTORY’s hit series VIKINGS raids SDCC!

7/18-7/20, 11 a.m. – 8 p.m. – ALL HAIL VIKINGS: AN INTERACTIVE EXPERIENCE – The activation includes miniature Vikings “ships” that visitors can race on actual water, a Photo-Op area for keepsakes, and Lagertha-inspired shield maidens who will greet visitors. The waterway is located across the street from the Convention Center at 450 Second Ave. at Island Avenue. Additionally, on Saturday, 7/20 at 6 p.m. the band SILENT COMEDY will perform for fans in attendance.
[CAST appears for fan autograph signing on 7/19 from 11 a.m.-12:00 p.m.]

Los Angeles, July 10, 2013
Nerd HQ announces the partial line-up of the panel series, “Conversations for a Cause,” the very popular philanthropic series of un-moderated panels taking place at Nerd HQ 2013 in San Diego July 18-21 in a new location, Petco Park (100 Park Blvd, San Diego, CA 92101) Gaslamp Gate.
This year’s panels include: “Cast from ‘300: Rise of an Empire,’” “Dr. Who,”“Haven,”“I, Frankenstein,” “Orphan Black,” “PBS Masterpiece: Sherlock,” “Psych,” “Stoopid Buddy with Seth Green,” “The Maze Runner,” “Thrilling Adventure Hour” and individual panels with Jared Padalecki, Joe Manganiello, Joss Whedon, Nathan Fillion and Nerd HQ Founder Zachary Levi, among others to be announced in the coming days.
Tickets will be $22 each and will go on sale Thursday, July 11 at 12 p.m. PDT at http://is.gd/cOZPPM.
Proceeds will benefit Operation Smile, mobilizing a world of generous hearts to heal children’s smiles and transform lives across the globe.

ABOUT THE NERD MACHINE – The Nerd Machine is a multimedia company dedicated in bringing its global clientele the best of apparel, accessories, software, hardware, music, and both long and short form video content. We not only put a premium on customer satisfaction and input but also collaboration, as we believe that some of the very best ideas may come out of the very community we serve. Our goal is to nurture an environment where community interaction thrives, creating the best and most forward thinking products available on the market. And, philosophically speaking, spearheading a “mission of redefinition” that changes the global perception of what a nerd is, and thereby allow everyone to celebrate the nerd in themselves. The question is: What are you nerdy about?

PREPARE TO TAKE FLIGHT AT COMIC-CON® 2013

BURBANK, Calif. (July 11, 2013) — It’s a backpack. It’s a cape. It’s a backpack with a cape! Warner Bros. Entertainment will once again sponsor the official bag at Comic-Con International: San Diego 2013, to be distributed to fans when checking in at the Con, the Studio announced today. This marks the fourth year that Warner Bros. and Comic-Con have joined forces to produce and distribute what Entertainment Weekly once called the convention’s “ubiquitous accessory,” ensuring that attendees have a unique keepsake from the world’s leading pop culture convention. Plus, for fans in San Diego who forgot their costumes, the “must-have” bag (according to Deadline Hollywood) not only lets attendees tote copious amounts of swag, but they can also flaunt their super hero side with the backpack’s detachable cape!