The 2013 San Diego Comic-Con officially kicked off it’s festivities with a few smaller panels for geek-related films, but the one panel that everyone must have been waiting for is Ender’s Game. Based on the Orson Scott Card novel of the same name, Ender’s Game follows the story of the young titular character who is recruited into a futuristic army to prevent a catastrophic alien invasion from occuring once more.

Director Gavin Hood, writer Roberto Orci, and film stars Asa Butterfield, Hailee Steinfeld, and Harrison Ford were all on hand to promote the film and show a teaser clip. Hit the jump for more.

After the aforementioned names were introduced, moderator Chris Hardwick gave attendees nice package of clips from the film itself.

We start off with a breathtaking scene of an orange sky with what looks like a massive ship being engulfed by a swarm of aliens called buggers. After that we start to see a small futuristic car that oddly resembles the one that was seen in Minotory Report roll up to a lake. The clip then proceeds to show Ender (Asa Butterfield) being recruited into the program and showing how his leadership skills exceed far above the rest of the recruits. Mazer Rackham (Ben Kingsley), Major Anderson (Viola Davis), and Colonel Graff (Harrison Ford) discussing his potential, his future, and being in awe at how Ender could be the key to winning the war.

The clip then moves forward to a very quick glimpse of the battle room where trainees become advance their skills against the bugger threat. We then see Ender lead his squad using an interactive touch screen (the same way we saw Tom Cruise did in Minority Report). But we also see Rackham questioning Ender’s decisions, saying that he is leaving his squadron behind. To which Graff replies that he is a leader.

The clip ends, but not before a the panel opens up to fan questions. One of the biggest questions concerned Scott’s controversial comments on homosexuality. Orci responded by saying that the film’s focus was on tolerance. Another great audience question asked how the film would deal with the multiple themes of the film. Hood replied by saying it would focus on the themes of leadership, compassion, and the morals you have on certain situations. Like most writers and directors, the behind the crew said that they wanted to stay true to the novel.

While we can’t exactly show you footage from the panel itself, you can check out this photo of Harrison Ford. 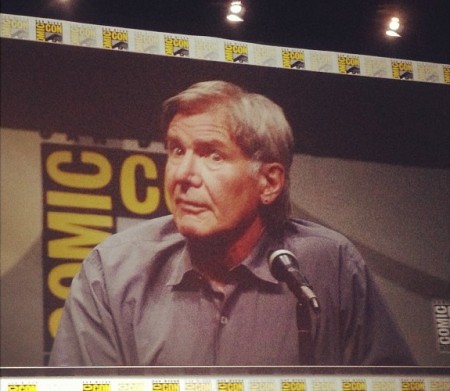