Europa Report is an indie sci-fi thriller that opens in theaters on August 2nd and is available now on Video-on-Demand. Europa Report is about a space crew that travels to Jupiter’s moon Europa to search for life. The moon has an ice crust with a global ocean of water underneath. The film came to San Diego Comic-Con in a Hall H panel moderated by Phil Plait. The panel included director Sebastián Cordero, producer Ben Browning, composer Bear McCreary, actress Karolina Wydra, and scientific advisors Steve Vance and Kevin Hand. Check out the highlights from the panel after the break.

The panel started by showing the trailer and introducing the panelists. Plait asked the panel why they chose Europa, and Cordero explained that he was approached with the script, and liked it because it was grounded. There is a balance between being entertaining and being scientifically accurate. He got even more interested as he Googled Europa. It’s very interesting. It’s the first moon ever discovered (outside our own), and it might have life underneath the layer of ice.

Browning explained that the original idea wasn’t about Europa. It was more about First Contact and what it would be like in the near future. They Weren’t sure if it’d be on Earth. He asked the scientific advisors about where to find life in Solar System, which lead to Europa.

The film’s lower budget dictated the documentary filming style. After seeing a clip about real moon of Europa from JPL, the scientific advisors talked about Europa. It has twice as much liquid water as Earth, and it NASA is looking at other ways life could exist outside Earth. The advisors were brought in during script writing, and were very involved. Hand praised the film’s characters, which were very deep and accurate. Plait reiterated that the portrayal of scientists in movies are usually bad, but this film makes them real characters. Wydra said the actors did a lot of research. 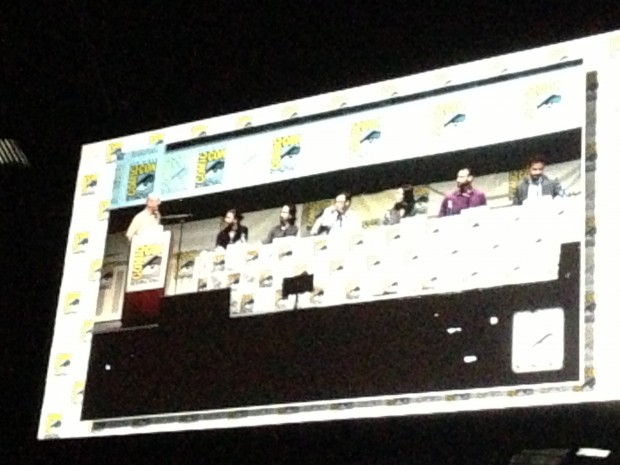 We see a clip of the landing on Europa that cuts just short of them touching down.
They used Apollo missions for a lot of reference of imagery and details. Everyone that came on project had to watch the documentary For All Mankind. The last clip is a tense moonwalk on Europa featuring Wydra. In the clip, the crew talk about the danger of radiation, which is a real issue. Jupiter gives offs a lot of radiation that would have to be dealt with.

McCreary talked a lot about his score. He feels his job was to make sure there was an emotional through line. He tried to find balance between realism of documentary style. He estimated that he probably scored the film 3 times before it was right.
There’s two personalities, an orchestral and a simplistic mechanical. Browning explains that they shot it more loosely to make it more like a documentary, so they didn’t know how score would go. It was like throwing paint on a canvas. The editing style is almost a character itself. McCreary pretended he was an employee of Europa Ventures trying to cover their ass. It helped explain why there was emotional music in a “documentary”. Cordero said there is danger of a film and characters being cold in documentary style, so music helps bridge that. McCreary claimed it is his favorite own scores.

Plait asked if there was any point they had to choose story over science in the otherwise realistic portrayal. Cordero explained that the original script had them making contact on the surface of the planet, but when they discovered that was unrealistic, they changed the third act to be under water. It actually brought more tension to climax. Hand said they used science as plot points (like radiation) and wove them into the story. Browning said they would contact consultants about various elements to see “what would happen?”. Speaking of realism, Wydra wore whole the whole spacesuit for moon walk. It was 50 lb. and modeled after real spacesuits.

Plait asked what are the real plans for Europa. Vance said we need to discover more about Europa before sending people. NASA is designing an exploration vehicle called The Europa Clipper. Hand went on to say that within the next few decades, we’ll be able to answer to the question of “are we alone?”. It’s a unique and profound time to be alive.