With Captain America: The Winter Soldier due out in theaters next year, film stars Chris Evans, Scarlett Johansson, Samuel L. Jackson, Anthony Mackie, and Emily VanCamp, along with co-director Joe and Anthony Russo came by to San Diego to present some footage and talk to their fans at Comic Con.

During the film’s press conference the directors and cast members talked about themes of the film, what it’s like for Cap to live in a world of iphones and other technological marvels, how cap is adapting to working with a new team, a strong female presence, and whether or not Falcon should appear in The Avengers 2. Hit the jump for more. 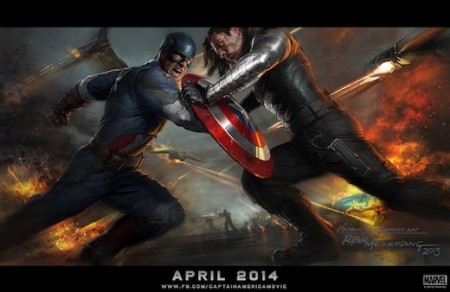 Question: How does this Captain America film set itself apart from the first film, especially after the events of The Avengers leading into it?

Samuel L. Jackson: That’s on the talking points list of things we can’t tell you.

Joe Russo: The movie is very different in tone from the first film. The first film was a wonderful love letter to the origin of the Captain of the time period. Cap is now in the modern world. The movie is a political thriller. In order to be germane to that tone, we wanted the movie to be as modern and as edgy and as aggressive as it could be ‘cause you can’t have thrills in a thriller unless the characters have real stakes and real jeopardy. Cap gets put through a lot, in this film. It’s action-heavy. It’s a very intense movie.

How do Captain America and Black Widow work together, in this film?

Scarlett Johansson: This film is in real time, so it’s been two years and we’re both Agents of S.H.I.E.L.D.  We’re fighting on the ground.  It’s not like we have these superpowers that we use, and fly around.  We have a short-hand between us.  We fight in a similar style.  It’s very much a working relationship.  Through a series of unfortunate events, they find themselves in a situation where they’re working relationship becomes a more intimate friendship.  They have some unexpected similarities between them.  They have their guard up and they have their trust issues.  They also have both been working for “the man” for their entire professional careers.  Through this unexpected friendship that forms, they’re starting to question what they want, and they start to question their own identity.  It’s a complex relationship that forms between them.  Chris and I have known each other for 10 years.  It’s our fourth movie together.

Chris Evans: We go way back. 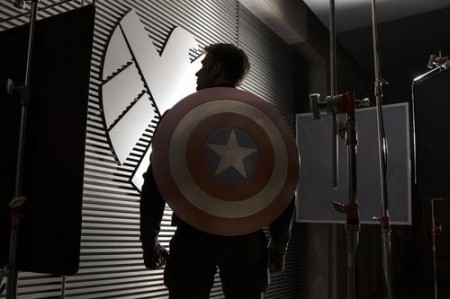 Chris, Captain America is really the only remaining wholesome, all-American superhero.  What’s it like to be such a classic American hero?

Evans: To be candid, the hurdle with Captain America is that his nature is to put himself last.  His nature is to take everyone else’s conflict and put it on his back.  As a result, it makes it difficult to find an interesting film.  Most complex characters have flaws, and Cap is a Boy Scout.  The first Captain America film was about giving him the opportunity to serve and be a soldier.  In The Avengers, you had so many other characters and all of these establishments of relationships, so you can’t dive too deeply into any individual character.  This movie is about showing Cap now.  Given the opportunity to serve and given the ability to give of himself, the question now becomes, “What’s right?” I think he’s so determined to be good and to do what’s right, the conflict with modern society, as opposed to the ‘40s is, “What is right?” In the ‘40s, it was very easy to say, “Nazis are bad.” We can all agree on that.  Today, it’s a little bit harder to know, “Who am I serving?,” with modern technology and access.  Where is the line? What are we willing to compromise, in terms of civil liberties, to ensure security? That’s where it gets blurry for Cap.  What’s the right thing to do? It makes an interesting conflict for him because it’s not about just doing the right thing.  It’s about, “What is the right thing?” I think we actually get to explore Cap struggling a little bit.  It’s not black and white, it’s grey.  That’s where his relationship with Black Widow comes to fruition.  The relationship with Black Widow is interesting because she’s someone who’s always had the ability to compromise her morals, and Cap is black and white.  As a result, something happens.

Evans: Sam, take it easy! Something happens and, as a result, these two people from different worlds need to rely on one another.  So, you have two people who, on the surface, may seem very different, find a lot of common ground and learn quite a bit from one another.

How is Cap doing now, with modern technology and today’s trends?

Evans: I think you’d get a little tired if every joke was, “What’s the internet?!” He gets it. The problem is that he doesn’t sling jokes. He’s not sarcastic. So, it’s hard to find the humor unless the humor is self-deprecating, but you can’t keep playing that one note of, “I don’t get it. What’s going on in this modern world?!” I think we’re past that. He’s up to speed. He knows how things work. He has a cell phone. We’re not just hitting that one note. We’re trying to find humor in other places, thanks to [Anthony] Mackie, in large part. He’s really good. He’s a funny guy.

Emily, what was it like to join this world?

Emily Van Camp: I can’t say too much about the character. I think people have a certain idea about what I’m meant to be playing, but I think they’ll be surprised about how we introduce this character. Compared to other things that I’ve done, everything has been a little bit different to this. It was certainly a challenging experience and an exciting experience. I had so much fun playing this part. I can’t say too much about how we introduce her. You’ll just have to go see the movie. But, it was a great experience.

The Marvel universe has such strong female characters. How does it feel to represent that presence in superhero movies?

Johansson: Well, most superheroine films are simply not really good. They’re just not well made. They fall back on this hair-flipping, posey, hands-on-hips thing. We do a little bit of that, of course, because it’s important that it looks good, but I’ve really had a great opportunity. Joss really set the bar in The Avengers to really celebrate these female characters that are usually bookends or ornaments in the film, to sell the sex appeal. He was such a pioneer in really flushing out these characters, starting with Black Widow, and really making her a character that could get punched in the face and could deliver the blow, and was an intelligent, complex, really strong female character for this series. It’s been a real pleasure for me to play those multi-layers and to really be able to act, and not just pose. Our characters have some real storylines here. We’re not just the romantic interest, and thank god for that. It makes our jobs interesting, and interesting to watch, too. 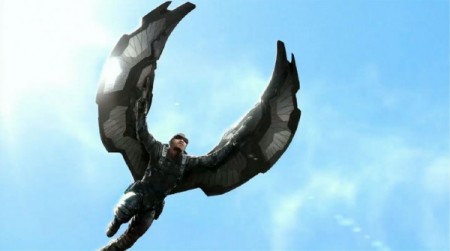 Anthony, now that Falcon is on the animated series, Marvel’s Avengers Assemble, don’t you think it would be cool if Falcon is in The Avengers 2?

Anthony Mackie: Growing up, my brother was a huge comic book person, and he always showed me the comic books with Black Panther and Falcon. So, when I heard about Falcon and was given the opportunity to meet with the Russos, and we talked about it and what they wanted to do with the character, the reason it worked so well is that the two of them had the ability to give dignity and substance to a character without making him heavy and hokey. What was so cool about the script, where it is now, and being able to work on it, as an actor, was having a three-dimensional real person that just happens to be a tactical expert that can fly. I think if the Falcon is added to The Avengers’ world, I’m looking for the opportunity to take down Iron Man, so I’ll be the only flying Avenger. Thor don’t count. The hammer flies. He don’t fly!

Captain America: The Winter Soldier opens in theaters on April 4, 2014