Just a few days after Comic-Con kicked off, The Optimist, a viral campaign for Brad Bird’s Tomorrowland, was launched. Little was known about the actual ARG, and since it’s debut earlier this July, fans and players have been combing through the site in hopes of finding another clue to the game.

Most found little gems within the website. Phone numbers listed led to faux websites. These faux sites had tiny Easter Eggs about Walt Disney himself and the shell corporations he used to build what is now known as the Disneyland park in Anaheim. Players followed to ARG characters Amelia, a filmmaking undergrad working on a documentary about her grandfather, and Wallace, a Disney enthusiast who makes art “inspired by the past, future and what could have been at Disneyland.”

With the D23 Expo kicking off in just a few short weeks, new developments have emerged revealing the next key pieces of the game. All of which will culminate for a grand finish at the biggest Disney gathering. Hit the jump for more.

Just a few days after comic-con, a few outlets received exclusive packages containing fragile contents. In it, there was a vinyl of Amelia’s grandfather’s records from the 1964-65 World’s Fair featuring the classic Sherman brothers song, “Great Big Beautiful Tomorrow.”

A video from Inside The Magic reveals the music that is on the disc, and much more. Embedded on both sides of the disc are various Easter Eggs about attractions that appear at the Disneyland parks, and a small narration provided by Carlos, Amelia’s grandfather.

But the header above, is the biggest piece of the puzzle of this mysterious ARG. Below is a full image of the map titled Walt’s Haunts. 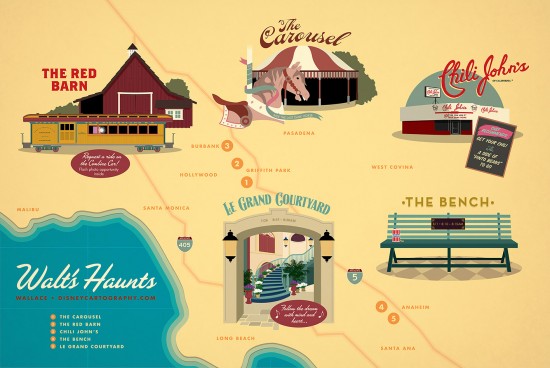 Among the standout destinations listed on the map are Chili John’s in Burbank. A real business unlike the faux website that was listed in our last report. Players were instructed to purchase chili with a side of pinto beans to go. So when the player go the delicious hot dog, he was also given a can of John’s famous chili. It may look like an ordinary can at first, but upon closer inspection you will notice something that sticks out. One of the ingredients listed is optimism. But no one really drives up to Burbank just for that, right? Nope. Inside the can was a message (pictured below.) 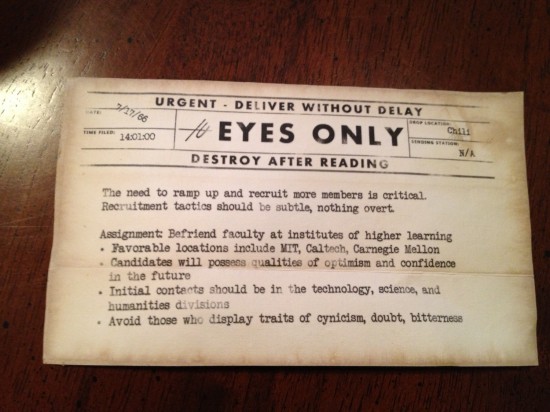 So when players appeared at Disneyland at the time and date, they were allowed entry into the exclusive Club 33, an upstairs restaurant located in the heart of New Orleans Square. There a player answered a ringing phone. The ARG character, Wallace was on the other line. Here’s what Inside The Magic reports:

On the phone was Wallace, who allowed the group to ask a question. When asked about his connection to The Optimist story, he noted he shares a vision for the future and that we are closer to that future than we think. He then pointed everyone to search for clues around Club 33, revealing a series of glasses featuring initials and symbols representing historical figures as well as a crest featuring the words “Cras es noster,” which translates to “The future is ours.”

The initials on the glasses were for Nikola Tesla, Samuel Clemens, HG Wells, August Eiffel, Jules Verne, and Amelia Earhart, among others. As some of you may remember, some of these people were Carlos’ inspiration.

In addition Wallace noted that there are many clues to be found throughout the park, leading players to continue the hunt beyond the days events. ARG locations also included a carousel park at Griffith Park, a Red Barn at Carolwood, and according to the site, a familiar bench dated August 1. The bench can be found near Great Moments with Mr. Lincoln.

Of course all of this will culminate for the big bad grand finale at the D23 Expo and we will be there to let you know what happens.