Do you always agree with the general populous when it comes to movies? Then our newest feature, For Your Reconsideration, may not be the right one for you. Twice a month, I will provide my own review to a poorly-reviewed movie that I actually like. Hopefully my reviews will inspire you to give a film a second chance. If you already enjoy that title, then maybe this will inspire you to spread the word. Today, I’m reviewing the 2003 action film Paycheck. 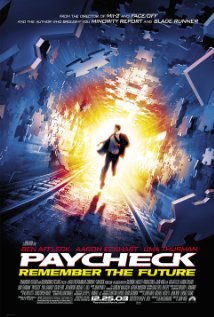 CONSENSUS: Though Dick’s short story has an intriguing premise, Woo reduces it to a lot of meaningless chases, shoot-outs, and explosions.

Paycheck is an adaptation of the short story of the same name by Philip K. Dick. Dick was a famous science fiction writer whose works have been turned into such films as Blade Runner, Total Recall, A Scanner Darkly, Minority Report, and The Adjustment Bureau. The film takes place in the near future and is about reverse engineer Michael Jennings (Ben Affleck). He takes jobs for weeks at a time and gets his memory erased afterwards to protect his clients’ intellectual property. Jennings doesn’t mind losing periods of time in his life because his paychecks more than make up for it. However, he is then offered a job that will pay millions of dollars, thus allowing him to leave the life. The only catch is that this job will be three years long.

After Jennings’ memory is wiped, he finds out that he forfeited all his money a few weeks prior, only leaving himself with a bag of worthless items. This leads him to be chased by both the FBI and the company he worked for as he unravels the mystery of why he gave up his paycheck.

The film has a great pedigree that should have gotten it better than $13 million on its opening weekend. Along with Affleck, you had famed action director John Woo and a cast that included Aaron Eckhart as the bad guy, Uma Thurman as the love interest, Paul Giamatti as the plucky sidekick, and Joe Morton chewing up scenery with Michael C. Hall. So, why did it fail? Well, 2003 was a tough year for Affleck. The nuclear bomb that was Gigli had opened just opened a few months earlier, and the public was already sick of the massive media coverage of his relationship with Jennifer Lopez. Add in the negative to mixed reviews, and you have the recipe for a box office disaster. While the production budget for Paycheck was only $60 million, its worldwide gross of $96 million still meant an overall loss for Paramount and Dreamworks.

This is my third “For Your Reconsideration”, and I thought I’d let you in on my process a bit. I have a list going of films I want to write about, and after I’ve chosen the next one, I watch it to refresh my memory. That’s usually not a problem. The previous two movies I’ve re-reviewed held up to my scrutiny. However, I have to admit that Paycheck isn’t that great. It’s by no means a bad film as the 27% critical rating would suggest, but it definitely has its problems. The biggest thing I noticed was the terrible cinematography and overall direction. I love Woo’s other work, so this is what shocks me the most. Both he and cinematography Jeffrey Kimball had been working on major hits for years, but it seems like they were experimenting in Paycheck. For instance, there were lots of slow motion shots that were overdramatic and unnecessary.

Even though the dialogue is a bit clunky, the overall plot is pretty clever. Affleck’s character has to use the items to solve the mystery and get out of danger, and it works pretty seamlessly. The science fiction part of the story is solid and enjoyable, and there are a few good action sequences. Even the cheesiness has its charm.

While this isn’t my most raving review you’ll see from this column, I do want to recommend watching the film. It’s definitely not as bad as people make it out to be, and it’s quite enjoyable to watch.