This week, we’ve been covering a mysterious countdown run by Sherlock fan site Sherlockology which, in the sense of a traditional countdown, would have ended tomorrow some time. However, the countdown ended today, after the site posted another image, with a time rather than the number 1. Sherlockology has come out and explained the entire campaign. Get the details and see the teaser for Series 3 after the jump! 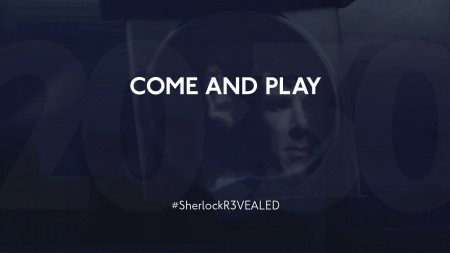 Sherlockology deliberately confused Sherlock fans with their countdown, and it was all given the go ahead by Sherlock producer Sue Virtue. The site posted an explanation on their Tumblr:

Sherlockology was informed in advance by the BBC of the intent to run a promotional trailer at the conclusion of the repeat airing of The Reichenbach Fall, and so with the blessing of Sherlock producer Sue Vertue devised a simple and mysterious countdown campaign to run across our social media sites. We launched with five pictures from Monday, with the expectation that it would countdown to the number 1 on Friday – instead, the final image revealed the time that The Reichenbach Fall would air, at 20:30 BST in a deliberate confounding of those expectations. Still, it’s better than waiting an extra day!

The campaign was entirely our own creation, with no involvement with the BBC itself, so what took us by surprise was the gigantic response everyone had to it, particularly the hashtag #SherlockR3VEALED, which ended up taking on a life of its own and (at the time of writing) has now surpassed over 12 million unique viewers worldwide on Twitter alone! That’s a lot of Sherlock fans!

Sherlockology then apologized for not being able to answer questions due to the confidentiality of it all. Many had known that the Series 2 finale would be re-airing today and thought that whatever the countdown was for would be revealed on Saturday. Of course that assumption was wrong and the surprise was the teaser for Series 3, which you can see below!