Mysterious J.J. Abrams Teaser Video Could Be For A Book?

Yesterday, we posted about the mysterious teaser trailer that was released on the Bad Robot YouTube page. The internet has been abuzz with speculation as to what the “Stranger” trailer is for. Some people thought it might be for the upcoming TV show Believe, but they already released a promotional video for it. Others went so far as to think it might be a teaser for the new Star Wars film, because the video opens with a starry sky and then ends with two words starting with ‘S’ and ‘W’, but that seems somewhat of a stretch.

Bleeding Cool thinks it may be for the upcoming book, S., that was devised by J. J. Abrams and written by Doug Dorst. Check out the site’s main evidence for supporting this idea after the jump.

Bleeding Cool noted that Huffington Post had an article back in May in regards to a promotional postcard given out for the book. The info they had on the book S. was as follows:

At the core of this multilayered literary puzzle of love and adventure is a book of mysterious provenance. In the margins, another tale unfolds—through the hand-scribbled notes, questions, and confrontations of two readers. Between the pages, online, and in the real world, you’ll find evidence of their interaction, ephemera that bring this tale vividly to life.

The promotional material mentioning the book’s release date had a specific font which can be seen below: 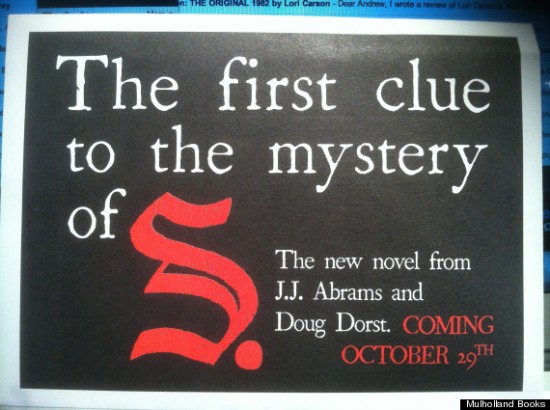 Compare that to some of the words from the trailer (as seen below) and you can see that the fonts are pretty similar.

We probably won’t know for sure until J.J. Abrams and Bad Robot confirm it for real, but until then, this is the best evidence that’s out there so far for what’s behind the mystery video. We’ll keep you updated once we hear more information.

Do you think this proves what the teaser is for? Do you have your own ideas? Leave your opinions and theories in the comment section below.

Here’s the teaser video, if you haven’t already seen it: