Without going into all these racing in cinema metaphors, Rush is probably one of the most memorable sports films in recent years. The Ron Howard-directed film, which made its debut at the Toronoto International Film Festival earlier this year, stars Chris Hemsworth and Daniel Bruhl as Formula-1 racing legends James Hunt and Niki Lauda, respectively. As with almost every sports-related film, our characters had nothing, but both were born to what they love, and for these characters, their hearts are set out to live and die on the race track. The pulse pounding and engine roaring races would take the checkered flag any day, but it’s how the film finishes those last few moments that makes the film drag and stall resulting in a less-than-stellar photo finish.

Regardless of how this film finished, Howard manages to turn what looks like a bitter sports rivalry on the outside into something more meaningful. Hit the jump for more.

By all accounts, a film like Rush is very predictable. The rise and fall of our racers, the rivalry that would fuel their motivation to become better racers, the sex, the drugs, the women, the money, the glory of being a celebrity, the sweet satisfaction of winning, the bitter taste of losing, and everything else in between. It’s all right there, in fact it’s something that can easily be found on Wikipedia.

But a film like Rush could not have come at a better time. After a summer chock full of superheroes and a rather dull August, and a very boring film like The Bulter, Rush is the perfect film to get you back into a theater. 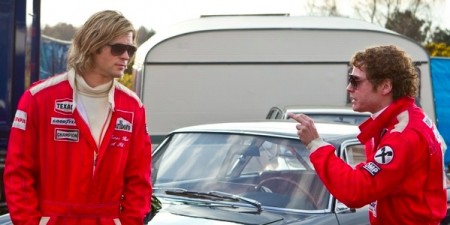 At stake, the philosophy of what it is to be a winner. For our characters, it’s not how many flags our two racers take, or how many cups sit on their mantle. Lauda (Bruhl) believes that winning doesn’t stop at the end of a season, and that to truly win you must win more. Hunt (Hemsworth) is the opposite, he believes that you must relish and bask in the glory in victory. The two play off each other like they actually had a rivalry off set. Hemsworth has this strong and arrogant bravado that is somewhat similar to his Thor character before he was humbled. Bruel, who is completely opposite of that, has this strong work ethic, and has the bigger picture seared into his mind.

Despite the differing philosophies, Howard never panders to the audience by exploiting their flaws. So while Hunt may be the more arrogant of the two, he is never presented as stupid. Same goes for Lauda. He may be more technical than Hunt, but he is capable of loving someone. In the end, audiences will be completely entranced by the two’s determination to win. And suprisingly enough, most of these spectacular performances of bitter rivalry are seen off the track and not on it.

However, like the sport itself, the film is dominated by it’s males, with the females relegated to being sexual objects, aside from Lauda’s wife Marlene who is presented as the only woman who has the ability to speak her mind. Olivia Wilde give it her all in the short amount of time she was given, and in all honestly, I really wanted to see more of her character. All in all, there are no strong female performances to consider.

But what really makes this film stall is the fact that the last few minutes of the film is turned into some sort of “the winner is determined by the person who gets the last word.” Rush cruises for so long, never once insulting the audience’s intelligence, but then it all falls apart at the one moment where it can’t. For it to play out in those final moments as it does, Rush would have been finishing the story of the bitter rivalry in a different way. It feels as though Lauda soiled the story by saying I am the winner and Hunt was the loser, and our friendship was nothing more than a sham.

WHich is an unfortunate decision, because Rush was really that close to being one a great film. It’s a really great sports film, but isn’t the best film ever, heck it’s not even a top ten film. However, if you can find a way to look past those last few minutes, or even just walk out on them, then you will walk out knowing that you sat though a pleasant film.

Rush is open in limited theaters today, but expands nationwide on September 27