Create Your Very Own ‘The LEGO Movie’ Sig Fig 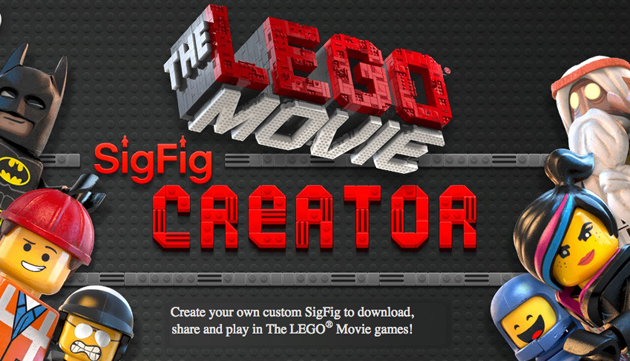 The LEGO Movie marketing campaign has taken a slight shift to the viral angle. We’ve previously posted a contest the film held where the winner would be a part of the film. Chances are if you are reading this post, you probably didn’t win, but the Warner Bros. team doesn’t want to let that stop you from enjoying The LEGO Movie (see what I did there) fun.

To celebrate the latest release of the trailer for the film, WB has created The LEGO Movie SigFig creator. What is it exactly? Well you get to create your very own SigFig, those little tiny yellow guys with half circle hands, awkwardly shaped heads, and simplistic faces. But there is much more to it than just a simple create your own character. Hit the jump to find out how you can do it and what other surprises are in store for your creation.

The premise of this site is simple. You start out with your basic LEGO SigFig body, then build your way from there. What kind of eyes, eyebrows, mouth, hair, tops, pants, accessories, and background. All of this is customizable to your liking.

To make this much more exciting than just creating your own SigFig, the site offers you a code where you will be able to edit and unlock your character for some upcoming games. You can also send your creation to anyone you know or even download it as a cover, icon, wallpaper, or poster.

So head to The LEGO Movie SigFig Creator and try it out.

Directed by Chris Miller and Phil Lord, The LEGO Movie is voiced by Chris Pratt, Elizabeth Banks, Will Ferrell, Morgan Freeman, Liam Neeson, Will Arnett, Alison Brie, and more. The film opens in theaters on February 7, 2014.