Marvel’s Cinematic Universe continues this Friday with the theatrical release of Thor: The Dark World. The sequel to the 2011 superhero blockbuster is the second film in Marvel’s “Phase II” movie slate as we move our way closer to The Avengers: Age of Ultron. Read my spoiler-free review after the break.

When we last left Thor (played by Chris Hemsworth) in The Avengers, he had returned to his homeworld Asgard with adopted brother Loki (Tom Hiddleston) as a prisoner. The Bifrost bridge that connects Asgard to the other eight realms in the Universe was still broken from Thor, so these realms dived into chaos. We meet back up with Thor in this film as he and his Warriors Three are trying to restore order. Thor’s love interest Jane Foster (Natalie Portman) has been trying to find him since he left her in New Mexico, and in the process accidentally gets possessed by a dark force called “The Aether”. The energy of the Aether will kill Jane, so Thor takes her back to Asgard to get her some help.

Our primary villain Malekith (Christopher Eccleston) is leader of the Dark Elves, who want the Aether to turn the Universe into darkness. They come to Asgard and reek havoc, including killing a supporting character that will have ramifications for the rest of the film. Loki has been locked up this whole time, but now Thor needs his help to save Jane and take down Malekith.

As you might be able to tell, the storyline in this film is much more complex and involved than the original. I didn’t even mention the backstory of Odin’s father originally defeating the Elves eons ago, or the fact that this is all possible because of a rare alignment of the nine realms. The storyline might be a bit much for some, but I found it refreshingly in-depth. 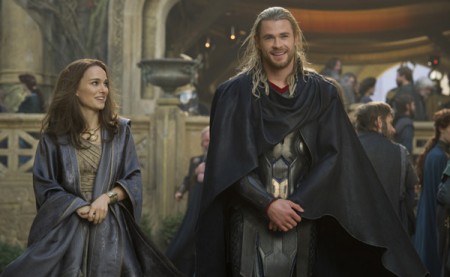 While I did enjoy Thor, a lot of its problems are fixed in The Dark World. The storyline is one thing, but there is some great worldbuilding in this film. We see a lot more of Asgard and other realms, which I think is thanks to director Alan Taylor. We also get to see more of the people that live in these realms. The character development is improved this time around. For instance, we get to learn more about Thor’s parents, especially his mother Frigga (Rene Russo). However, it’s Loki that truly stands out in this film. We get to peek into his soul, yet we are never quite sure what he’s really thinking or scheming at any point. Even after three films, Hiddleston still breathes new life into the character. Unfortunately, with all this extra development, the villain Malekith gets left behind. There’s not much to the character, but I didn’t mind all that much.

The film also has a lot more action and sci-fi elements throughout, where the first movie used action sequences as bookends. There is still plenty of comedy in The Dark World, and possibly too much. The Marvel films have always been more on the lighter side, but the humor in the Thor films isn’t as natural as say the Iron Man films. It’s more gags and silly humor. Fortunately, there’s enough good stuff mentioned above to balance the tone. There are also some nice nods to the first film and The Avengers.

The end of the film leaves us a bit of a cliffhanger, and there’s TWO end credit scenes. One teases a future Marvel film, and the other is a bit of a throwaway.

Overall, Thor: The Dark World is a fun ride that improves on the original. While the over-the-top humor still plagues the franchise, there’s enough action, character development, and plot to balance it all out.