A few weeks ago, it was announced that the Mark Wahlberg-produced HBO series, Entourage, was getting a movie which would pick up after the series finale. Today, Midtown Comics in New York received a poster teasing a Wonder Twins movie starring Mila Kunis and Ashton Kutcher. Is it a hoax or the beginning of a viral for Entourage, which has featured a fictitious movie based on a DC Comics hero before? See pics and get more info after the jump.

In the second and third seasons of Entourage, Vince Chase (Adrian Grenier) stars in an Aquaman movie directed by James Cameron. The film had the biggest opening weekend box office ever, scoring $116,844,114. Of course that would never happen in our world, but that film launched Vince into superstardom. Unfortunately, Vince did not return to reprise his role as Aquaman in the sequel due to wanting to star in a passion project. Warner Bros. fired him and cast Jake Gyllenhaal instead with Michael Bay directing and a screenplay by Kevin Smith. So what does that have to do with The Wonder Twins? It would appear that Warner Bros. is looking to build a DC Comics cinematic universe in the Entourage movie. 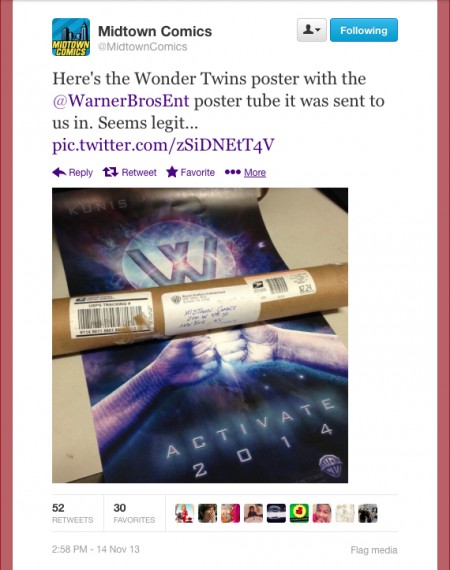 As you can see it would appear that Warner Bros. sent this poster out. There is no confirmation that Warner Bros. is behind it, but the mailing label is adorned with their logo and address. Could be a Photoshop job, pretty easy to mock up a mailing label. Here’s a better look at the poster itself from Midtown’s Tumblr. 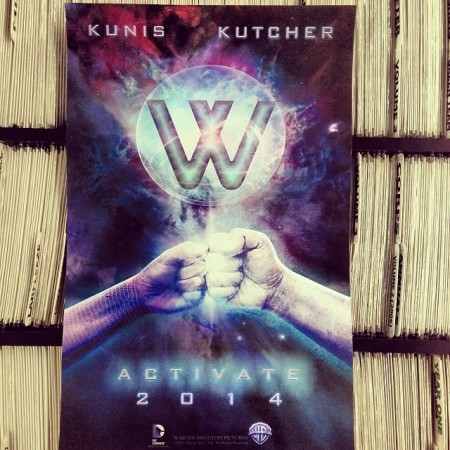 So what do you think? Is this the start of a viral campaign for Entourage or is it just some elaborate prank? Let us know in the comments below!