Track The IMDB Ratings Of Your Favorite TV Shows With GraphTV

If you ever wondered what all the IMDB rating numbers on individual episodes of your favorite shows would look like as a collective, well, as they as, there is an app for that. The nifty tool let’s you visually explore the ratings of TV shows in the IMDB database. Now this isn’t quite exactly a smartphone app, but it might as well be.

Created by Kevin Wu, GraphTv allows you to explore the chart of ratings for your favorite shows based on those exact IMDB ratings. There are a couple of flaws to this site however. Hit the jump to see what they are.

Now there are many shows out there, a lot of them, and it appears that GraphTV has yet to recongize that fact. If you type in “True Detective” for example, HBO’s hit show, you will find that the site cannot access those numbers, despite the show having already been rated on IMDB.

But for the shows that do work, we will provide some examples of what the charts look like.

Regression lines and progression show how disinterested or interested the fans were of the particular episode. 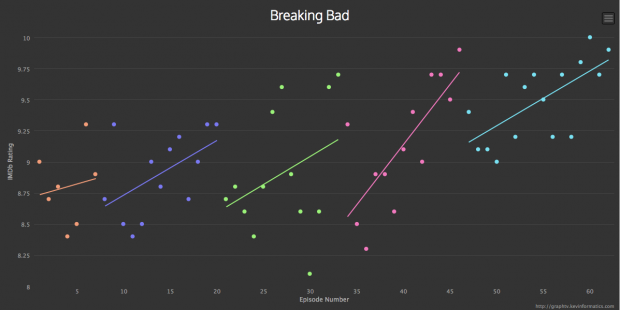 Let’s take a look at Breaking Bad for example. As you can see “not every season actually has a significant trend, so be careful with these (or check the provided r-squared values).

Another minor problem is that for all but the very most popular shows, the samples sizes aren’t enormous.

So these charts don’t by any means define the actual show. For an ongoing show, here is a look at Archer.

So check out the site for yourself to see where you favorite show ranks, and how each episode was rated by your fellow audience.