The Raid 2 is the hyper intense action sequel to the hit foregin film The Raid.  In it, Rama (Iko Uwais) returns to active duty only hours after the massacre in the building where the first film took place ended.  He is asked to infiltrate one of Indonesia’s most dangerous mob families.  It’s only after he gets into the family that he realizes he is in too deep, and the only way out is to go even deeper.

We were asked to sit in on a roundtable during a press day for The Raid 2.  During our roundtable interview, we asked Uwais (who answered through an interepeter) what it was like to prepare for this film, some of the mishaps that happened on set, if he has had any offers from big Hollywood, and what it was like to be a foreign film superstar.  So hit the jump to read our interview.

How do you prepare for a role like this?  What is the workout like for the stunts, combat, etc?

So with The Raid being such a successful franchise, has the pressure gotten to you yet and has Hollywood came up to you for any roles the same way your Raid co-star got to be in Fast and Furious 6?

Uwais: I’m proud to be an Indonesian, who can bring Indonesian cinema to other countries, the world. It’s like a cultural exchange, because I can bring Pentjak Silat (Indonesian Martial Arts) and our culture to the world. So we are kind like doing a culture exchange.

And how about other roles?

Evans: You keep saying that, I don’t know what that is?

So it’s a joke that is played around with the other journalists there, if they are asking this kind of the question, we say depending on the schedule. Hiding it in fornt of the camera.

Evans: Basically all he is saying is it’s all about the fucking money.

Uwais: Depending on the characters, the one they offer. It’s not because I want to be the lead actor.

So how many bones did you break on set or how many character bones broke in the film?

Evans: It’s a romance. We are so misunderstood. 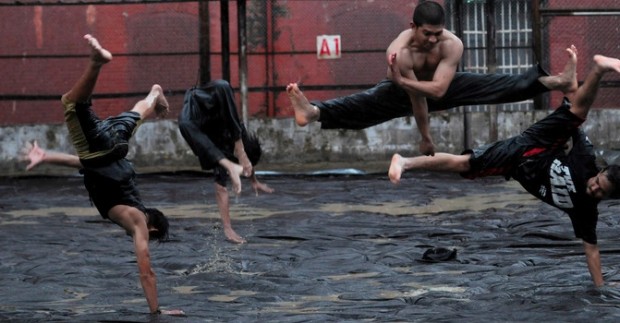 How many takes does it take to get all of the choreography on film?

Uwais: One take. We only get one take from him.

Evans: No no, I never get one take from you. It’s a long process sometimes. It can take up as far as 15 shots. It went as high as 51 for one scene.

Uwais: There was one shot that I thought was only one take. Where I was in the car, and I “punched” the driver, and it was the real punch in the face.

Evans: We never do the punch in the face for real. Because if we do it for real for more than one take, it can cause damage.

Uwais: The driver was annoyed. So when I shoot somebody, I am really friendly with him. BUt when Evans said action, I hit him really hard, and I thought the handling of the cameras was good for one take. Nope.

Evans: Because the punch was good, but the grab of the handle wasn’t clear.

Evans: Then he took another punch to the face, this time softer. And in that one the handle was okay, but the punch wasn’t as good. So we took that one punch, and there was a nice cut point, where it comes back up to where it look like one flow.

The Raid 2 opens in theaters on March 28.