The Signal is perhaps one of the more interesting viral marketing campaigns we have come across due to the fact that it is not one we would see unless it came from a blockbuster tentpole film. The premise of the William Eubank-directed sci-fi thriller certainly lends itself to have a viral marketing campaign, three college students are lured into the middle of a desert by a hacker, only to find themselves in the hands of the government.

Our first encounter with The Signal’s viral campaign led us to RUAGITATED.com. The landing page was a command page where entering the right command led you to the film’s first trailer. Now a new update requires a bit more effort from the user than just putting a simple command code. Hit the jump to learn more.

Once again, you will need to head over to RUAGITATED.com to see the new images and video. But you will need to enter the command code: locate. A geo-location map will pop up, and you will be required to input these coordinates: Latitude at 35.843630 and the Longitude at -115.45645. Here’s the image below just in case. 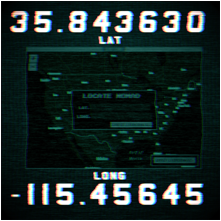 And just in case you don’t know where to look, we have provided you with the video of what we found when you enter those coordinates.

There are plenty of hidden Easter Eggs to look out for throughout this website just by using those coordinates. So have a little fun by browsing the selected coordinates, you may never know what you are going to find.

This latest viral update could also mean that there is a new trailer just around the corner. We’ll be sure to keep you updated if there is.