Disney is already knee deep into the business of retelling classic fairy tales. The fact that they have made a business out of it via their animated films, just shows that there is always more to a story than what we see or read. Do these retellings make for a good film? Sometimes it does, and sometimes it doesn’t. But when it comes to these fairy tale stories reimagined, we get a live-action animation hybrid that is heavily glossed over with CG and visuals.

Often times when you get a film that is so heavy with visual effects, other parts of it start to suffer. In this case, it’s the story. Like Alice In Wonderland and Oz: The Great And Powerful, the visuals are spectacular, and a few performances are wonderful, but other parts of the cast are wasted, and the script is something that does not reflect what we see in the visuals.

And that is what has happened with Maleficent, starring Angelina Jolie. Hit the jump to read the full review.

Like Wonderland and Oz, Maleficent isn’t as concerned with retelling what has been told, instead we are given a new perspective on other characters. With Maleficent, we see the titular character was actually a powerful young and very naive fairy once in her life. Her strong wings allowed her to fly through the land of Moors, which looks like the world of Wonderland and Oz, except it’s for fairies. Her power allows her to construct vegetation and communicate with tree-like creatures But her naivete  would be her downfall, as her first experience with young love would lead her to become the wicked sorceress.

Unfortunately, the narrative suffers as a whole, as Maleficent is more concerned about showing how powerful Maleficent (before and after her transformation) is than the actual character itself. The number of exposition in this film is unnecessary. The film starts off by explaining that there has been angst between the Moors and the Human world, with a nefarious king looking to expand his rule by attempting to kill Maleficent. However, age is catching up to him, and Stefan (Sharlto Copley), an ambitious squire, looks to take the crown by giving the king what he wants. One night, the two remember what their relationship was like before the war. As the two reminisced, Maleficent falls asleep, and in an act of what can only be perceived as date rape, Stefan maliciously takes Maleficent’s wings off, and presents them as a trophy to the king.  Hours later, Maleficent would wake up only to feel agonizing pain and realize that she has been stripped of her ability to fly.

We then move forward to Princess Aurora’s coronation, where three bumbling pixies (Imelda Staunton, Juno Temple, and Lesley Manville) bestow gifts onto the baby. But before the final gift can be bestowed, Maleficent, in strapping black leather, horns, and a devilish smile comes in, and reenacts the famous green flame scene where the child is cursed with a sleeping spell that will occur on her sixteenth birthday when she pricks her finger on a spindle.

From there, it all goes down hill. After the scene we jump forward to a teenage Aurora (Elle Fanning) and her pixie caretakers, now humanized. Ordered by the king to take care of her until after her sixteenth birthday, we see that these fairies don’t resemble their animated counterparts. What’s so strange about it is they turned the ineptitude meter  beyond what the dial can take. And thus we are forced fed this notion that Maleficent isn’t all that bad or as bad as we are lead to believe. The three fairies are childishly fighting, while baby Aurora nearly runs off a cliff, Maleficent is there to save her. Baby needs to be fed, while the three pixies throw baking flour at each other, Maleficent is there to feed her. Baby needs to be held and cared for, while the three pixies just fight for some reason, Maleficent … oh you get the picture. But this idea that she became a surrogate mother is even all the more strange as she wanted to hurt Stefan by hurting the princess.

While the film does try to paint Maleficent as a scorned fairy, a lot of the problems itself lies within the direction from Robert Stromberg, especially in the final act. Sure the first two-thirds of the film aren’t particularly well written, but the third and final act seem like it was rushed together and isn’t well thought out. The entire thing makes Maleficent look like a visual SFX sizzle reel than anything else, especially towards the empty conclusion.

Hobbled and rushed, the film feels devoid of any sort of charm or likable qualities.  But Maleficent does have a few saving graces. Of course the visuals, which is actually something we have all seen before; but the film stays afloat thanks to Jolie and Sam Riley.

Maleficent, the character, though underwritten, has some a wicked charm as she grows to like the very thing she is set out to destroy. Going as far as giving her a nickname – of course it has to be Beastie – to fortify the bond between the two. Riley, is also somewhat likeable as Diaval, a raven turned into a human, thanks to Maleficent. You see, Diaval can change into any creature that Maleficent wishes, which makes for wickedly PG hilarious banter when he gets changed into something he doesn’t like or tries to point out the obvious. Aurora is way too two-dimensional to even explain why the character is horrible. And Stefan is even more of a bore to try to comprehend. His thought process and decision making shows how awful and sad the script really is.

The other problem with the script is that, being a strong female-led film, it doesn’t come off as something the female-gender would aspire to become. Maleficent gets metaphorically raped, and the only thing she does is lash out. Is that reason enough to turn wicked, sure, maybe. But her fellow forest creatures doesn’t do anything to convince her that taking the dark path is the wrong way to go. The film refuses to embrace the notion that being wicked is okay.  Maybe Wreck-It Ralph‘s Jennifer Lee could have taken a stab at some of the rewrites, as that film nailed the “being bad is okay, because I’d rather be me” theme right on the head.

Another confusing part of the film is how the shaky relationship between the Moors and the human kingdom suddenly turning a corner overnight, without any explanation whatsoever. Stefan was so headstrong about trying to destroy the Moors, that the two are united in just a matter of minutes. Where is the consistency?

Maleficent isn’t so much of a test of patience as it is a test of trying to poke more holes into a dam that already has far too many leaks. With no actual strength, consistency, and hollow conclusions, all Maleficent is just another visual sfx sizzle reel that lacks anything resembling emotion or audience engagement. 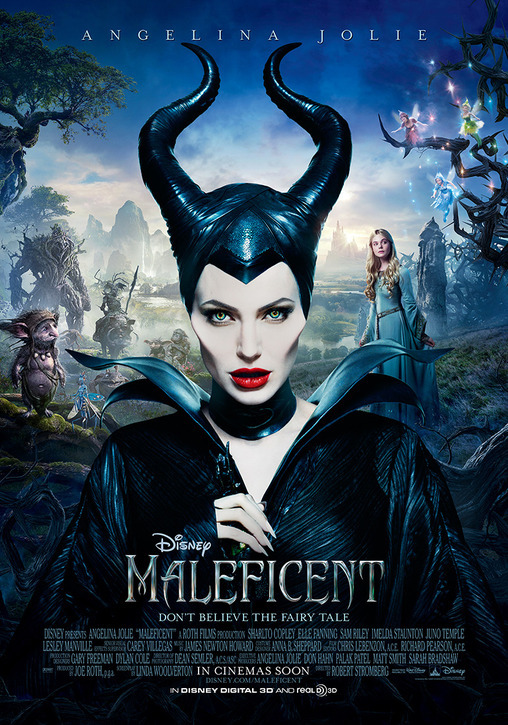