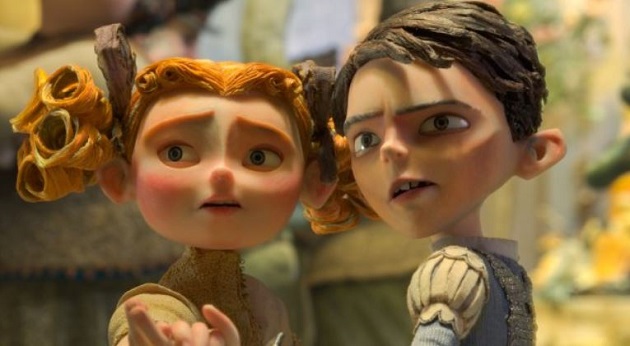 The stars of LAIKA’s The Boxtrolls, Issac Hempstead-Wright (Game of Thrones) and Elle Fanning (Maleficent) sat down to talk to press during SDCC ’14  about the upcoming movie and their enthusiasm for collaborating on the stop-motion picture. Following up Paranorman, this fall’s release tells the story of a boy named Eggs who’s been raised by tiny creatures that dwell in the sewers of Cheesebridge.

At Comic-Con MovieViral got to check out a scene from the film during the panel that showed the infant Eggs being taken care of by a father-like Boxtroll who finds his tiny human a bear that plays music. The incredible world the studio behind Coraline has crafted is a feast for the eyes as once again all the minute details combined with new tech promises to invite audiences to a new story filled with whimsy and heart.

Wright, who plays Eggs, in the movie expressed how the creativity of the company inspired him to sign on to voice the lead  character, “It was like YES! It was jumping straight on board to be a part of LAIKA universe is an opportunity not to be passed up.” His co-star, Fanning who plays the rambunctious Winnie Portley-Rind revealed she did not hesitate to be a part of the production, citing her sister’s work with the company’s breakout hit, “I was familiar with it because of Coraline, my sister (Dakota Fanning) did the voice of Coraline so I knew about how long it took and how they made everything and I’ve always been interesting in miniature things growing up so  to me it was so intriguing and they sent me this script, like a booklet of all these drawings, what they wanted the Boxtrolls to look like and a picture of Winnie, a sketch. Right away I wanted to do it. I haven’t done much animation.”

Based on the story “Here Be  Monsters” by Alan Snow, the company used the main theme of the book to lay the foundation for a much bigger world they’ve built. The character of Winnie isn’t included in the book, Fanning shared, but was pleased that her character helps to guide the audience into the world the children live in. “Winnie is very curious and wants to be in everybody’s business so she sees everyone is obviously terrified of  the Boxtrolls that live in Cheesebridge, they are the evil of all evil and there is this tale of the Trapshaw baby that basically means the Boxtrolls stole this baby and killed it and ate it and all this terrible stuff and so she’s obsessed with that. One night, kind of late, she sees Boxtrolls and a boy that’s with the Boxtrolls and he’s in his weird outfit, the eggs box. She’s like ‘What is this?’ She obviously does some snooping and they bump into each other.”, Fanning said.

Wright added that he thought the character of Winnie added a good foil to his character, “I think its an exciting prospect because he’s kinda been stuck in a character that sort of pansy scare-dy cat for years and years. And to meet someone who’s sort of brutish and tough, it helps him transition from Boxtroll to boy.”

When Winnie begins to unravel the truth of what happened to the baby that went missing, it seems to fall on deaf ears as her family doesn’t take her seriously and the nefarious Archibald Snatcher (Voiced by Sir Ben Kingsley) is hot on their tail to exterminate the Boxtrolls. They kind is chalk it up to her need to be noticed, as Fanning explained, “Winnie is nine, she’s very spoiled. Her dad is the mayor of the town but he doesn’t do his duties, he eats cheese, he loves cheese definitively more than his own daughter.” Her character’s curiosity to figure who Eggs is and if the Boxtrolls are evil is definitely due in part to her quirks Fanning thinks, “She’s always trying to get someone’s attention and she’s very obsessed with very grotesque things even though on the outside, she’s very girly and had the curly Shirley Temple hair, she’s actually deep down kinda tough which I like.”.

Both Eggs and Winnie seem to come together because they’re both lacking the familial figures a kid needs. Wright and Fanning agreed that they are bonded because their friendship is the closest they’ve got to a real relationship. They cited a moment they shared when they actually got to record a scene together and how it helped to bring gravitas to the story.  Wright elaborated, “When you finally do it with a person on screen, you’ll be conversing with, it does feel kind of a bit more like acting if you will. You’re there doing it. a real scene.” Without giving too much away Fanning added,  “And the scene we did was more of an intimate scene where we’re sort of talking about what a father is supposed to be like. So it was more of like a softer, wordier scene which was nice to have like the actor there to talk to, to bounce off the emotions.”

It was important to the two leads to really bring out the real heart of their character’s story and they both shared what they thought bonded them to their characters. On Eggs, Wright related, “I like to think we’re both sort of leaders and like to lead things. Eggs is great at leading the Boxtrolls and that’s probably my favorite trait of his. That he is a kind of Boxtroll but he hasn’t completely lost all of his human virtues and he can get out of his box and he can fight back.” And Fanning provided a surprising answer as to why she felt close to her character, “I think on the outside, Winnie is so girly and in that way she wears those frilly dresses that she likes but she likes gross things. She knows its kind of a forbidden thing. For me, I’m on the outside, blond, blue eyed and I’m very happy all the time and I smile a lot but I really love depressing movies. Those are my favorites which is so weird but I love to cry and feel emotions. I don’t think that people would ever really suspect me of that. I love Blue Valentine.”

While the two got to work on one scene together, they also shared that they got to visit the actual set of the movie. Fanning who went to LAIKA when she was little, said she was still amazed by the experience, “It was the most incredible thing.  When my sister did Coraline, I went down and saw all the little puppets for that.  And then, I went back for The Boxtrolls, and it still blew my mind.  I know it takes so long and I know they move everything, but there are fingernails on those puppets that are painted, and each little joint moves.  It’s so incredible.  I think everyone should go there and visit it, once in their life, but I’m sure it’s so top-secret.  We’d walk around the hot set and you can’t move.”

Knowing the painstakingly made details on the Boxtrolls set, Wright admitted he was super cautious  and curious when he visited, “I was chatting with Travis (Knight), the lead animator, about what happens if they do knock a puppet over or something goes terribly wrong, and he said they have to just carefully get it back up again.  I guess sometimes the arms will break, so they have to take the puppet off, half-way through a scene that they’ve probably been doing for weeks, and they’re thinking, ‘This could be the end of my life.  The scene that I’ve been working on has just been ruined.’ They’ve got a special frame-checker, so that they can match everything up to the last frame that they took, and they have to carefully do it.  It’s such a process, and they’re such patient and talented people.”