50- Had a base idea that it would be a robot, but they needed more research to make them look cool. The team met with different robot specialists and read various research papers on robotic technology.

51 – The key was to make sure that what the Microbots did in the film, would be true to the real world. Meaning it had real applications. For them, if you just make stuff up, the audience will refuse to believe that it’s true.

52 – The robots needed to connect and operate together. Think of the Microbots as ants. Ants have a cooperative nature, so the visual effects team used that idea as the basis of how the Microbots would operate. The effects team wanted to capture that little eerie feeling of ants working together for their Microbots.

53 – As you will see in the film, these Microbots will have the ability to create structures, and these structures will need to have integrity. So the team studied architecture, design, and form. The team wanted to make the audience felt as though the Microbots are operating off a certain code that makes them want to form structures of a certain type.

54 – To make sure that these robots would be able to cooperate they way they wanted to, the team decided on electromagnetism. They would make sure to use that idea into the design of the Microbots.

55 – The Microbots have a simplistic design, but each side of it allows it to rotate around, and connect to other Microbots to construct.

56 – The Microbots maneuvering is a pretty interesting sight to see. For instance, if they were laid out in a row, and they wanted to move, the first row of Microbots would be pasted to the back row, and so on and so forth. These Microbots are actually helping each other.

57 – In an average shot, there can be up to 20 million Microbots. This large number allows themselves to almost reconfigure anything.

58 – So from a storytelling point, if the Microbots wanted to show their aggressive nature, they might form a claw to throw the car. But in order to keep the Mircobots’ grounded nature, the visual effects team had the Microbots always forming devices to be able to accomplish their task. So instead of forming a hand or claw, they formed a catapult to throw a car.

59 – Since the Microbots are stolen property, there are two different styles we see. When we see Hiro use it, its almost free flowing, but when Yokai uses it, there is a circuit board feel to it.

60 – With the Microbots having a stohastic nature to it, it is constantly sampling. So if they aren’t doing the right thing, they will readjust. So for the catapult, the microbos would sometimes sacrifice their own integrity to get the job done. The Stohacto nature was intentional, the visual effects artist made sure they added a smooth movement and a stutter moment. This would speak to the nature of how the Microbots would move, they would configure, reconfigure, and evaluate. But it would always reflect the idea of what they were trying to figure out or device they were trying to build.

61 – Test shots were used to prove that they had what the directors would be interested in.

62 – How do the Microbots come to be? Well they are storyboarded first, they they are sent to the layout department, where everything is roughblocked, then it is sent over to character animation where it the idea of what the microbots would be is expanded upon, then effects takes over, where they fully visualize the microbots, where they are finalized by lighting and other departments.

Giving The Heroes The Effects
63- As aformentioned, the effects are an extension of the character, and since our protagonists have superhero personas, they need to have certain effects that reflect their superhero nature. So Hiro works together with his friends to figure out what their interests are, and how he could utilize that and turn it into a super power.

64 – Hiro and Baymax have the power of flight, so the effects department took what they see from the real world and integrate that into the character’s super suits. So the department would look at various smoke trails left behind by jets, and how certain engine exhausts worked. Turbines give off certain heat patterns that are caused by the fuel hitting the heat wave, which reignites and causes diamond shaped patterns to appear.

65 – But the research would help them define the size and shapes of their characters. So the smoke trails would help us tell where Hiro and Baymax are coming from and where they are going. So the team would also dedicate their time figuring out the flight path, and how they could design the proper smoke trail for Hiro and Baymax. 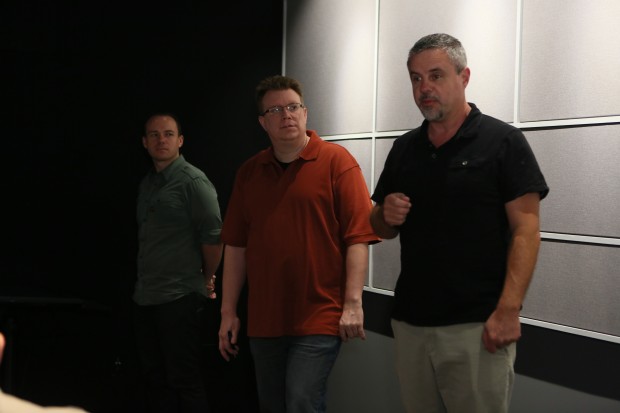 67 – Gogo can best be described as a character who loves speed. The team looked at inspirations like lights on car wheels and fire dancers. To get what they wanted visually, the team played around with long exposure photography, which is why you see that visual light trail.

68 – Fred is a guy in a suit, or a Kaiju enthusiast. He likes to shoot fire, which Hiro had to create in a way that would be cool and interesting. Fred’s fire power would be one of the first tests using the Hyperion technology. It shows the light simulation the best, and is one of most visually sophisticated effects, this includes the fire, lighting, and smoke effects.

69 – Wasbi loves lasers and plasma beams, so Hiro worked on creating electromagnetic blades. Once again, long exposure photography was used in this. In order to create some of Wasbi’s effects, the team had to work closely with animation.

70 – Honey Lemon loves color, brightness, and happiness. So she has different colored chemical bombs where she can grab from her purse. The team looked at some of the coolest chemical reactions. Sometimes effects artists are constrained by trying to create an effect that is grounded in reality, and they would need a simulator to do that. But for Honey Lemon, they were free to do what they wanted. Because they were able to have that freedom and integrate simulated effects, they were able to make Honey Lemon’s effects look like a lot of fun but also be somewhat grounded as well.

71 – The production design team even had to work on the smallest details of the city, so when John Lassesster asked the team to create a new world, he also instructed them to take note of the surroundings and the scope of reality.  So they needed to be familiar with all the intricacies of the designs in San Fransisco and Tokyo so they can achieve the look and feel of each respective city.  Against the backdrop, the production team wanted to make sure that the characters were a great foil to the complexity and richness.

72 – Finding Baymax’s face may sound surprising at first.  While Baymax has no mouth, he will be able to express emotion using head tilts and eye blinks.  To find the right kind of eyes that will be able to get the right emotion, the team decided to use the bells, found on Hall’s trip to Tokyo, that had an interesting shape.  The bells had these two circles that were connected by one line, and the designers sound something spiritual and unique about it.

73 – At Disney, the teams are constantly inspiring each other, so the design of Baymax constantly changed.  Baymax’s character designs did include a mouth at first, but Lassesster loved the idea of not having a mouth.  The team also decided that Baymax would feel more robotic without a mouth.

74 – Hiro needed to be very appealing and very relatable, so some of the visual effects artists looked back to the thing they did during their own childhood like pull their backpacks up to their necks.  Other relatable things include hoodies and baggy clothes.

75 – The visual effects team also looked what they did during their everyday lives when they were kids. Those kinds of personal touches. Would help shape each of our hero’s mannerism. 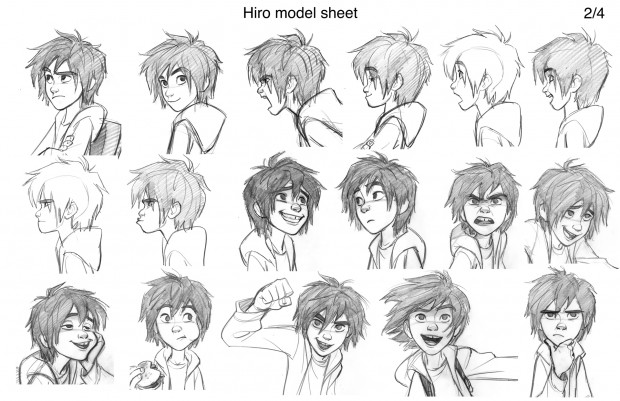 76 – Once a character has been realized, the visual effects artists must successfully transfer 2D designs into a 3D CGI world.  So the effects team would need to draw up as many facial expressions as possible at many different angles to get the the right perspective of the character. 3/4 views, side views, front views.  But the biggest concern for the visual effects artists was not to lose the simple style of the model sheets.  Every expression had to be true to the character.

77 – These model sheets would serve as a guideline for the animators, so they could understand what the characters would look like when they are happy without going off model/concept.  It is also used to keep things in perspective and keep the characters as appealing as possible. 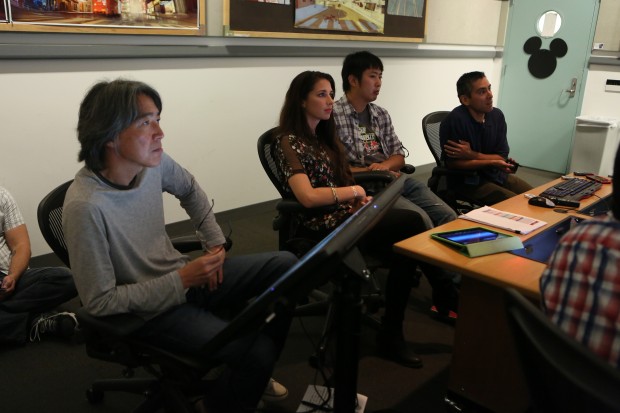 78 – Color is very important to the characters attitude and personality, so making each of them unique would help define each of the characters.  For example, Fred is unpredictable and goofy, and is really into Japanese pop culture, which is why his costume isn’t as coordinated as his other characters.  Whereas Honey Lemon is happy and has a warm color pallet.  She is represented by more yellow and pastel colors. Gogo’s tough and extreme colors, so her costume has a leather texture to it.  Wasbi’s costume was inspired by a Japanese samuari, but since his attitude changed during the course of the years, they visual effects artists had to change that too.

79 – For the superhero suits, they believed that the more simplified the costumes are the more iconic it is.  So for Fred’s is inspired by a Kaiju, which has very bright colors.  For Honey Lemon, the team wanted to make sure that her skills were represented properly.  So she has a happy color pallet which was complimented with those feminine skills, which is why she has the kind of costume of high heels a purse with a bunny charm on it.  Gogo’s yellow would portray speed.

80 – Baymax’s costume would be based on famous mechas and robots, and they would use colors that has never been seen before.  For Hiro, the purple costume would be used as complimentary colors to Baymax’s suit to reinforce the thought that the two were a team.

Onward to animation and other miscellaneous things about Big Hero 6...