Liam Neeson truly has a particular set of skills. He’s been a Jedi, a hitman, a lion, a mythological Greek god, Batman’s teacher, a knight, Jean Valjean, and so much more. But for a man who has many talents, it’s hard to believe that no one has tracked all of his kills throughout his film career. Well today that ends.

To help promote his upcoming thriller A Walk Among The Tombstones, Universal Pictures has released a infographic that charts Neeson’s kills in all of the released films he has been in. The chart also makes a note of who he has killed (humans, battle droids, etc), and how he has killed them (lightsabers, guns, swords, barehands, etc). Hit the jump to check it out. 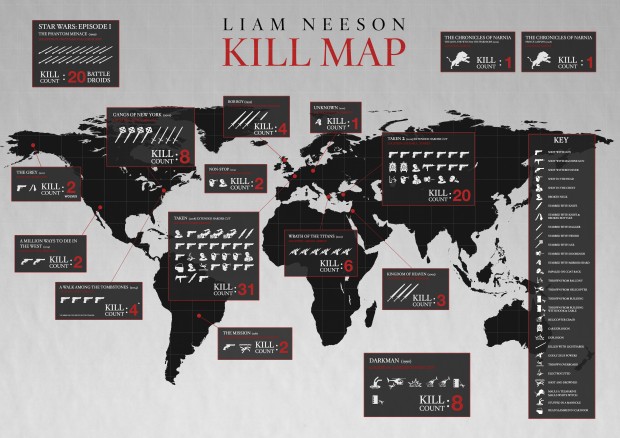 A Walk Among The Tombstones Opens this Friday.

‘A Walk Among the Tombstones’ stars Liam Neeson as Matt Scudder, an ex-NYPD cop who now works as an unlicensed private investigator operating just outside the law. When Scudder reluctantly agrees to help a heroin trafficker (Dan Stevens) hunt down the men who kidnapped and then brutally murdered his wife, the PI learns that this is not the first time these men have committed this sort of twisted crime.. nor will it be the last. Blurring the lines between right and wrong, Scudder races to track them through the backstreets of New York before they kill again.

A Walk Among The Tombstones