Trailers Weekly: ‘The Woman In Black: Angel Of Death,’ ‘The Gambler,’ ‘Insidious Chapter 3,’ And More

Trailers Weekly is a feature in which we bring you the most popular and talked about trailers of the week. Sharing trailers is a classic viral practice, and trailers are still the most mainstream way for people to learn about movies. We’ve got trailers from The Woman In Black: Angel Of Death, The Gambler, Insidious Chapter 3, Judge Dredd: Superfriend. Hit the jump to see them all.

The Woman In Black: Angel Of Death
England, 1941 With London in the midst of the blitz, two teachers evacuate a group of schoolchildren to the abandoned Eel Marsh House. Seeking safety from the bombs in the remote coastal location, the group instead find themselves facing an evil far more frightening when their arrival awakens the Woman in Black. The Woman in Black: Angel of Death opens January 2, 2015.


The Gambler
Jim Bennett (Academy Award®-nominee Mark Wahlberg) is a risk taker. Both an English professor and a high-stakes gambler, Bennett bets it all when he borrows from a gangster (Michael Kenneth Williams) and offers his own life as collateral. Always one step ahead, Bennett pits his creditor against the operator of a gambling ring (Alvin Ing) and leaves his dysfunctional relationship with his wealthy mother (Academy Award®-winner Jessica Lange) in his wake. He plays both sides, immersing himself in an illicit, underground world while garnering the attention of Frank (John Goodman), a loan shark with a paternal interest in Bennett’s future. As his relationship with a student (Brie Larson) deepens, Bennett must take the ultimate risk for a second chance…


Insidious Chapter 3
The newest chapter in the terrifying horror series is written and directed by franchise co-creator Leigh Whannell. This chilling prequel, set before the haunting of the Lambert family, reveals how gifted psychic Elise Rainier (Lin Shaye) reluctantly agrees to use her ability to contact the dead in order to help a teenage girl (Stefanie Scott) who has been targeted by a dangerous supernatural entity. Insidious Chapter 3 hits theaters May 29.


Judge Dredd: Superfriend
I thought I’d give my friends (I mean that figuratively as I don’t know anyone at Marvel) at Marvel a break and myself a taste of my own medicine by “bootlegging” Judge Dredd. Just so that we are clear, this is a different interpretation of the character and the universe, an interpretation that is family friendly and geared towards little children. 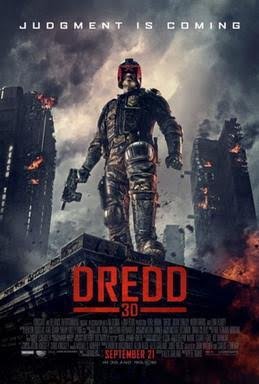